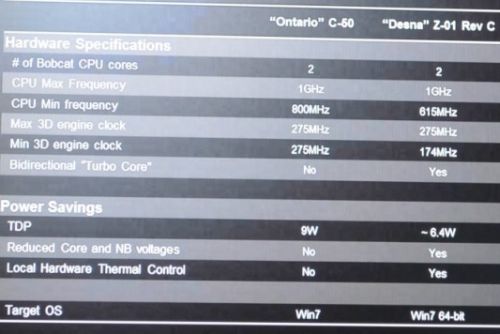 AMD recently introduced a new low power processor for tablets and other mobile devices. It’s part of the company’s Fusion line of products, which means it bundles a CPU and graphics core onto a single chip. But the AMD Z-01 Desna chip is the most energy efficient member of the Fusion family, with a TDP of between 5.9W and 6.4W (I’ve seen both numbers used).

How does that compare with the 9W AMD C-50, which was the reigning champ in AMD’s low power line up until this week? The folks at nDevil found a comparison chart.

It looks like both the AMD C-50 and AMD Z-01 are dual core chips and both have the same top speeds with a maximum CPU frequency of 1 GHz and a maximum 3D engine clock speed of 275 MHz.

The new chip also uses Turbo Core technology to increase the processor clock speed when only one core of the dual core chip is active. This should enable higher performance without increasing power consumption.