The first smartwatches featuring Google’s Android Wear software are scheduled to launch in the first half of 2014. They’re designed to give you at-a-glance information on your wrist and respond to voice commands and touch gestures. But you don’t have to wait for the LG G Watch or Motorola Moto 360 to get a sense of how the watches will work. 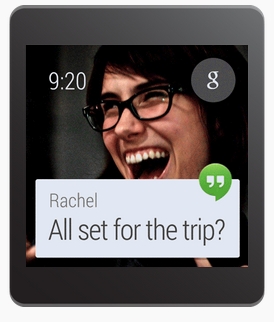 Google has released a preview SDK for Android Wear. It’s designed to let developers add support for wearables to their apps, but it also gives the rest of us an early glimpse of how Google’s new wearable platform will work when it launches to the public.

The folks at Ars Technica, Android Police and Tom’s Guide have in-depth overviews, but here are some of the highlights:

At this point there doesn’t appear to be a way to create third party apps that run directly on an Android Wear device. Instead the preview SDK lets developers create apps that can send notifications to a device running Android Wear.

That means a smartwatch running Android Wear might not be much use without a smartphone… unless you just want to use it to tell the time. But as a smartphone companion, an Android Wear device could let you see and respond to notifications from a variety of apps without pulling your phone out of your pocket.

Ars Technica reports that any app which shows notifications on your Android 4.3 or later phone should already be able to send notifications to an Android Wear device, no extra code required. But that doesn’t mean developers won’t be able to add new features designed specifically for watches and other wearables.

One of Google’s promotional videos for Android Wear shows people using their watches to identify songs, track calories burned and other activity-related info, search Google for information such as sports scores, or even open a garage door… suggesting that third-party apps and functions could be in the works (or maybe an official Google garage-door opener is under development).

Think of it sort like the Chromecast SDK which lets developers create Android apps that run on your phone, but which can send content to your Chromecast.