The Alcatel Xess is an Android tablet with a big screen. Or maybe it’s an all-in-one computer with a reasonably small screen and Android software.

Any way you look at it, the Xess is a device with a 17.3 inch full HD display, a 9,600 mAh battery, and a built-in kickstand and handle. It weighs more than 5 pounds, so you probably aren’t going to want to hold it on your lap the way you would a smaller tablet. But you can easily move it from room to room and use it to watch videos, play games, update your calendar or shopping list and more.

The Xess is coming to America soon for $499, and I recently got a chance to spend a few minutes with this Android-powered… thing. 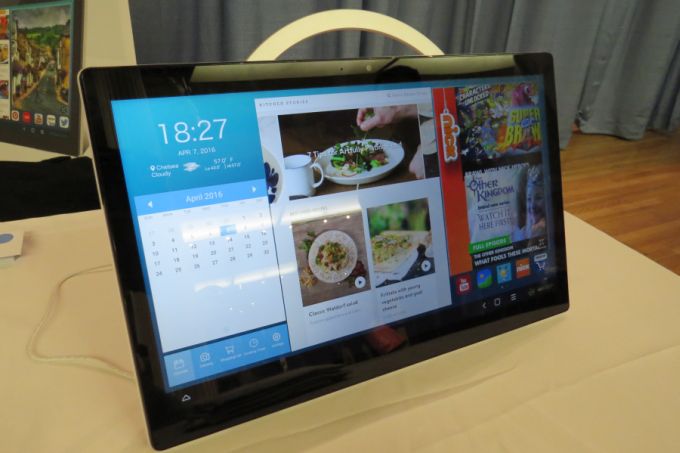 The device has an octa-core MediaTek processor, 3GB of RAM, and 32GB of storage. While I didn’t get to test the system’s performance extensively, it seemed to be able to launch and switch between apps pretty well, and it should be perfectly serviceable as a media player or light-duty game system.

It has a stand that’s sturdy, but adjustable, allowing you to position the tablet flat on a table or standing up at a variety of angles.

The system comes with a capacitive stylus, which you can just to jot notes. It’s not an active pen, so it doesn’t support pressure-sensitive input. But it should be good enough for scribbling addendums to your shopping list.

In China, Alcatel will sip the tablet with Phoenix OS. That’s an operating system similar to Remix OS, which gives Android a desktop, taskbar, and a multi-window mode that lets you run apps in resizable windows that you can move around the screen.

The US version ships with Android 5.1 and an optional “Xess Mode” user interface that has a 3-panel view. The version of the Xess Mode software I saw was still a work in progress, and only supports a few apps (including a recipe app that runs in the middle, camera and calendar apps that run in one panel, and a few interchangeable apps that run in the third panel, including a Nickelodeon app and a photo gallery).

I wasn’t all that impressed with Xess Mode, but it may become more useful over time as Alcatel updates the software.

And you don’t have to use Xess Mode. Tap an icon and you can switch to a full Android user interface.

Other features include a microSD card slot and a front-facing camera. When I asked Alcatel what kind of battery life the Xess gets, I was told the company is still running tests, but according to the announcement press release, it should be able to run “all day.” At the very least, you should have no problem unplugging it to move around the house and use for a few hours at a time.