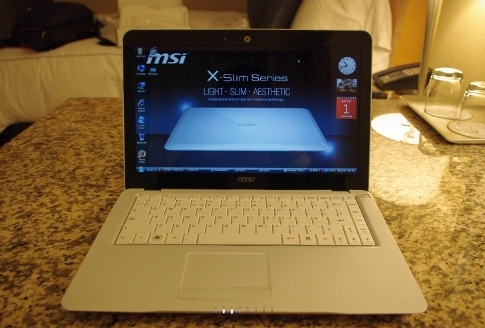 MSI is beginning to show off some of its newer netbooks and ultralight laptops at trade shows. And the folks at SlashGear recently caught up with MSI spokesman Andy Tung and got a closer look at the upcoming MSI Wind U123 netbook and the MSI X340 notebook with a 13.4 inch display and Intel CULV processor.

Tung confirmed that the Wind U123 will come with the new Intel Atom N280 CPU and advanced options like a built in TV tuner or 3G modem. The netbook will also come with a choice of a 6 cell, 5.5 hour battery or a 9 cell, 8 hour battery.

Tung also explained that the 13.4″ version of the MSI X340 is just the first model in the X-Slim line. The company also plans to introduce other sizes, including possibly a 15.6 inch version and an 11.6 version later this year. Those models could show up as soon as May or June.

You can check out SlashGear’s video with Andy Tung after the break. Meanwhile, Laptop Magazine’s Mark Spoonauer got to spend some hands on time with the X340, where he put the 1.2GHz CULV processors to the test and ran some benchmarks. The machine came out ahead of Intel Atom powered computers like the Samsung NC10 or Dell Inspiron Mini 12.