The Raspberry Pi line of devices are inexpensive, low-power, credit card-sized computers. But while there are USB ports for connecting a keyboard, mouse, gamepad, or other accessories, there are also a series of GPIO (General Purpose Input/Output) pins that allow you to connect hardware in other ways.

For instance, you can connect a HAT (Hardware Attached on Top) board to add motor controllers, GPS, a display, or other features.

Now the folks at Pi 2 Design has launched a Kickstarter campaign for one of the most ridiculous/awesome-looking HATs I’ve seen. It’s called the 503HTA Hybrid Tube Amp. 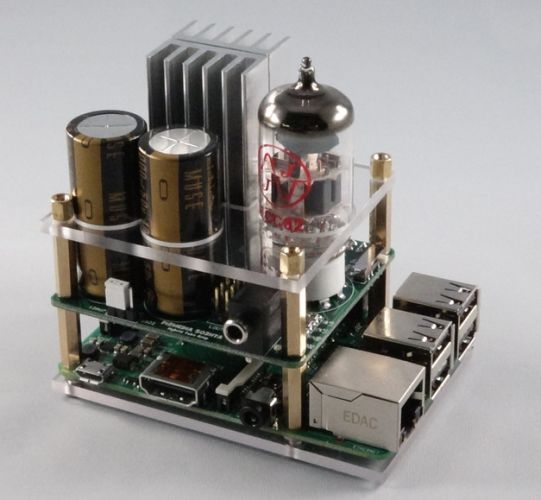 As the name suggests, this HAT is basically a tube amplifier that rests on top of a Raspberry Pi computer and connects to the 40-pin GPIO connector.

Backers of the Kickstarter campaign can select one of two different tubes that will ship with the 503HTA. But the developers note that you should be able to use a number of other tubes with the HAT.

Sure, the 503HTA Hybrid Tube Amp is several times more expensive than the Raspberry Pi computer it sits on top of… and not everyone is convinced audiophile-quality hardware is necessary to make music sound good. But I can’t think of a better way to make Raspberry Pi’s little computer look like something out of a Steampunk story.

If the crowdfunding campaign is successful, the amp is expected to start shipping to backers in July. The full retail price is expected to be $149, but early birds can try to snag one of the first 100 for a pledge of $99.