Looking for a smart home speaker, but can’t decide between an Amazon Echo with the Alexa voice service or a Google Home with Google Assistant?

Why not both? At least that seems to be the thinking behind the Clarity Speaker.

It’s basically a familiar-looking speaker with a 7 inch touchscreen display and Android software. But the key selling point for the Clarity is that it’s supposed to support Alexa, and Google Assistant (or at least the “OK Google” voice service that’s still more widely available on Android devices for now).

Clarity is up for pre-order for $149 and up through a crowdfunding campaign on Indiegogo. 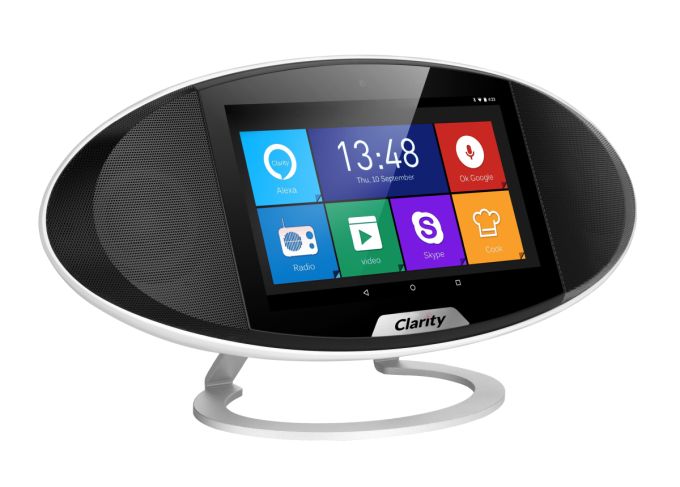 The full retail price is expected to be $199.

The device has a 1280 x 800 pixel display, stereo 5 watt speakers and far field mics that can pick up your voice even if you’re not standing near the speaker.

It has a 2MP camera for making video calls, a quad-core processor, 16GB of storage, a microSD card reader, and dual-band WiFi and Bluetooth. It runs Android 6.0 with a launcher app featuring large icons to make the system look a bit more appliance-like than a typical Android tablet.

There’s also a 1600 mAh battery that Clarity says should provide up to 6 hours of audio playback time, or up to 2.5 hours of video playback. While there are plenty of Android tablets that can do better, this isn’t really a tablet. It’s a speaker that’s meant to be used around the house, so it’s probably fair to think of the battery as a bonus feature that lets you move the speaker from room to room without turning it off, or use it unplugged for brief periods.

Chinese device makers have been cranking out similar hardware for a few years, but the promised support for both Alexa and Google voice services makes this model a bit unusual.

The question is whether you actually need both?