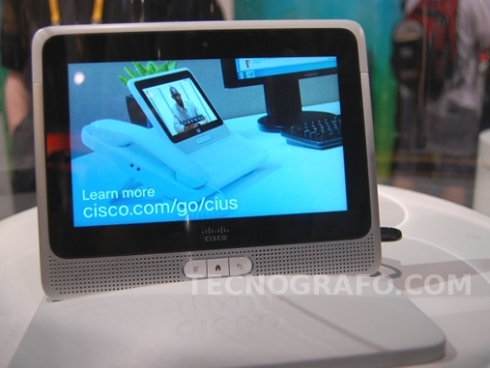 Yesterday Cisco announced plans to bring a new business-oriented Android tablet to market in the next year. While the tablet isn’t ready to ship yet, we don’t just have to look at rendered artwork to get a sense of what it will look like. Tecnografo snapped a bunch of photos of a prototype at a Cisco event in Las Vegas, including the image above,

It looks like we can expect two cameras — one on the front for video conferencing and another on the back for snapping photos or shooting video. There are also more ports than you’ll find on most Android tablets, including several USB ports, Ethernet jacks, and HDMI output.

Engadget also noticed that the Cius isn’t the only Cisco tablet on the horizon. The company is also planning to deliver a 7 inch, 800 x 480 pixel tablet with a 1.1GHz Intel Atom processor and Ubuntu Linux. Like the Cius, this machine isn’t really meant to combat the Apple iPad as a general purpose device. Instead, it’s aimed at managing your home energy systems by connecting to your heating, cooling, and other appliances over WiFi or Ethernet.