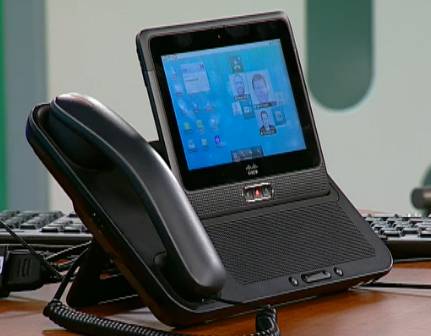 This morning Cisco unveiled AppHQ, a new app store for the Cisco Cius tablet. The company followed up the initial launch with a roundtable event to discuss the tablet and the new software platform for the device.

The Cisco Cius is a 7 inch Android tablet based on a design by OpenPeak. But it’s built to be a business-oriented device rather than a consumer product. Cisco is bundling video conferencing and meeting software with the tablet as well as hardware security features that will make it difficult for unauthorized users to access data on the tablet. IT administrators will also be able to remotely wipe data from lost or stolen machines.

There’s also software for making voice and video calls and accessing office documents. In a demo, Cisco showed off the ability to place a video call to a contact, and keep the call running in the background while you perform other actions on the device.

You can also see a docking station in the image above which lets you use the Cius as an office phone. The dock has ports for a keyboard and mouse, a loud speaker, and a headset. When docked, you can use the keyboard and mouse to control a virtual desktop so that you can basically run Windows on the tablet without relying on an on-screen keyboard to get work done.

Another thing I learned today is that the tablet will be available with optional 3G or 4G capabilities and that all models have user-replaceable batteries: something that’s becoming increasingly rare in Android tablets.

In today’s event, Cisco execs went out of their way to explain that while the device runs custom business apps, at its core it’s running a standard Android 2.x operating system which allows the tablet to run pretty much any Android application. This allows developers that want to get their apps into the Cisco AppHQ to use the same tools they would use to submit apps to the Android Market.

Cisco says the Cius will roll out globally starting July 31st for under $750. You can find more images after the break.