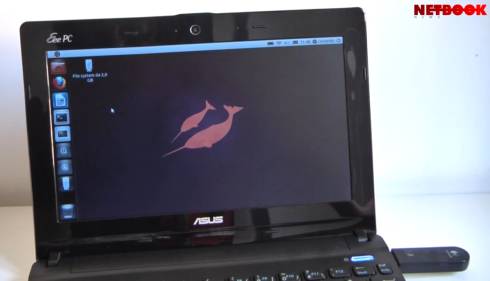 The Asus Eee PC X101 is an inexpensive netbook with 1GB of RAM, an 8GB solid state disk, and a 1.33 GHz Intel Atom N435 processor. Those specs are pretty anemic compared to a typical 2010 or 2011 model netbook, but they all help keep the price low. Asus expects the X101 to sell for $199. But there’s one more thing the company has done to keep the price low: The Eee PC X101 ships with MeeGo Linux instead of Windows.

That means Asus doesn’t have to pay a Windows license fee to Microsoft, which saves a few bucks. And as Linux-based operating systems go, Asus probably could have done worse than MeeGo. The OS is optimized to run on devices with low power Intel Atom processors and machines with low resolution displays. It’s also backed by Intel, which manages a third party app store called the Intel AppUp Center. Asus slapped its own name on a version of that app store before loading it on the netbook.

But while MeeGo seems quite zippy on the Eee PC X101, it’s a relatively new project and there aren’t really all that many third party apps available for the platform yet. The user interface also feels a little more smartphone-like than desktop PC-like, and it could turn off some users that may be looking for more of a desktop and taskbar kind of experience.

The X101 is just starting to hit the market in the US, but Riccardo Palombo at Eee PC Italia has been playing with one for a little while, and he deiced to try replacing MeeGo with a couple of different operating systems to see how it performs.

The 8GB of flash storage makes it difficult to run some operating systems. For instance, Windows 7 Home Premium eats up 7.4GB of disk space, which leaves very little room for you to install apps or load media. That said, Palombo says the computer feels pretty snappy with Windows 7, although you may also want to upgrade to 2GB of RAM.

Ubuntu Linux 11.04 also works nicely, and all of the computer’s hardware was recognized out of the box — but the computer apparently felt a little slower with Ubuntu than with MeeGo. The operating system used less than half of the 8GB of disk space.

Lubuntu 11.04 is a light weight version of Ubuntu which uses the LXDE desktop environment instead of the default Unity software. Palombo reports that Lubuntu boots faster and uses less space than the standard Ubuntu system, and the OS feels a little faster.

Finally he tried out Chromium OS, which is the open source version of Google’s Chrome OS. It’s an operating system that provides little more than a web browser, and he reports that while most of the Eee PC X101 Fn keys aren’t recognized by the operating system, everything else works well and the web browsing experience is very fast and reliable.

In other words… if you like the idea of a $199 netbook but aren’t sold on the MeeGo Linux experience, there’s hope. It looks like the hardware can easily support a range of other operating systems if you’re willing to roll up your sleeves and install them yourself.