Say you like the simplicity of Google’s Chrome OS, but want access to a wider world of native desktop apps. You could use Crouton to install Ubuntu on a Chromebook (and run it in a browser tab). Or you could install Chromixium on just about any recent computer with an x86 processor.

Chromixium is a full-fledged desktop-style operating system based on Ubuntu. But it has a user interface that’s designed to look like Chrome OS and it puts the Chromium web browser front and center. 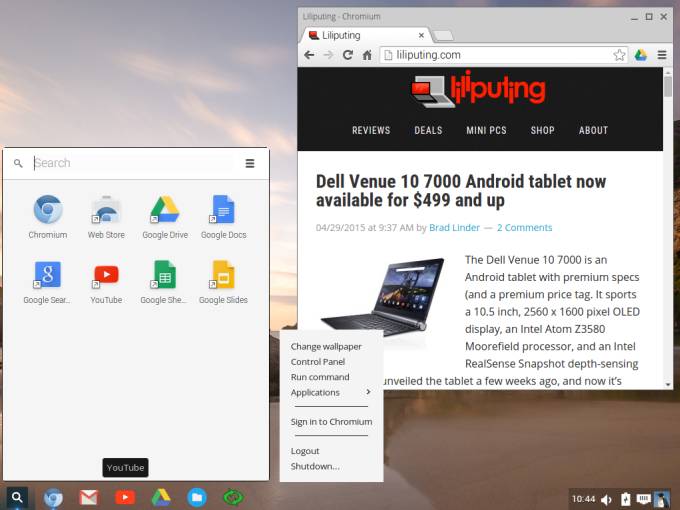 That means you can run Chrome web apps and synchronize your apps, browser history, and other settings with your Google account. You also get a Chrome OS-style desktop, app launcher, and taskbar.

But under the hood, Chromixium is based on Ubuntu. That means it’s a GNU/Linux operating system that can run native desktop apps including LibreOffice, GIMP, Firefox, and Steam, just to name a few.

The taskbar is pre-populated with common Chrome shortcuts including YouTube, Gmail, and Google Drive and there’s a search icon in the lower left corner which you can click to open the Chrome app menu.

You can also right-click on the desktop to bring up a context menu that lets you launch other apps, change the wallpaper, access settings, and run commands. You can use the Synaptic package manager or open a terminal window and use apt-get to install apps and manage your system.

A computer running Chromixium probably won’t boot as quickly as a Chromebook. But almost anything you can do with a Chromebook you can also do with the Chrome or Chromium web browser on a Linux, Mac, or Windows computer. Chromixium is an attempt to offer the best of both worlds by providing a full-fledged GNU/Linux operating system with a Chrome OS-like desktop.

14 replies on “Chromixium: Ubuntu Linux… if it looked like Chrome OS”