It looks like the first Chrome OS tablets without physical keyboards could be on the way soon. But… what’s the point?

But over the past few years Chrome OS has become a much more touchscreen-friendly operating system and Android tablets have… kind of stagnated. So I’m actually pretty excited about the possibility of a Chrome OS tablet (which I’m just going to go ahead and call a Chromepad until Google or someone else stops me). 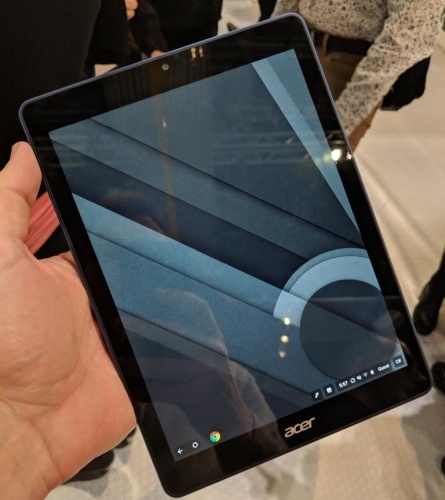 Over the past few years Google has added an on-screen keyboard and touch-friendly icons and menus to Chrome OS. The company has also built a complete Android subsystem for the operating system, allowing you to run just about any app available from the Google Play Store on supported Chromebooks and Chromeboxes.

In other words, a modern Chrome OS device is effectively an Android device. It just also happens to have these features, which most Android phones and tablets lack:

The first and last items on the list are the ones that intrigue me the most. I used the Dolphin and Firefox web browsers on my Android phone for years, because Chrome for Android didn’t support the LastPass password manager extension. I made the switch when LastPass finally found a way to work with Chrome for Android, but there are plenty of other Chrome extensions that still aren’t available on Android devices. That won’t be an issue on a Chromepad.

As for software updates? If you have an Android device then you probably get updates delivered by your phone maker or wireless carrier. And odds are that you’ll only get those updates for a few years, if at all.

I’ve been a long-time Google Nexus and Pixel user, so I’m used to getting monthly security updates and a major operating system update every year or so. But even Google has a habit of only rolling out updates for its own phones for around 2-3 years. If you have a third-party phones, the results can be hit-or-miss. A handful of smaller phone makers have a reputation for never releasing a single update.

Chromebooks, on the other hand, receive automatic over-the-air updates that are delivered by Google, not by your device maker. And Google provides at least 5 years of updates for every new Chrome OS device, starting from the day of launch (which means if you buy a 2-year-old model you only get 3 more y ears of updates, but that’s still not bad).

Sure, by PC standards, 5 years of updates still sounds arbitrary and short. There are plenty of people running the latest versions of Windows on computers that are more than a decade old. But 5 years of updates for a Chromepad sounds pretty great when compared with the abysmal software lifecycle for most Android phones.

Keep in mind that Google and its hardware partners haven’t officially announced any Chromepads yet. We know that there’s some Chromium code commits that suggest developers are testing some Chrome OS tablets. We know that Google has said Chrome OS is coming to new form factors. And at least one person spotted at least one Chrome OS tablet that Acer had on-hand at an educational technology trade show in London this week. But the picture he posted has since been removed, so it’s impossible to say whether we were looking at a prototype for a real product that’s launching soon or just an idea that Acer is playing around with.

But I certainly think the launch of a Chromepad would be the most exciting thing to happen in the tablet space in a while.

Until that happens, the next best thing might be the convertible Chromebooks Asus, Samsung, and others are offering. At just about 2 pounds, the 10.1 inch Asus Chromebook C101 could almost be mistaken for a tablet.

34 replies on “Why Chromepads could be better than Android tablets”