Google’s Chromecast may be an inexpensive device designed to let you stream video from the internet to your TV. But developers are already hard at work finding new ways to use it.

Developer Koushik Dutta is working on software that’ll let you stream anything straight from your phone to your TV without going through an online video site like YouTube.

Meanwhile, developer Sebastian Mauer is working on an app that eliminates the need for Google’s $35 Chromecast device altogether. It lets you treat any Android device like a Chromecast. 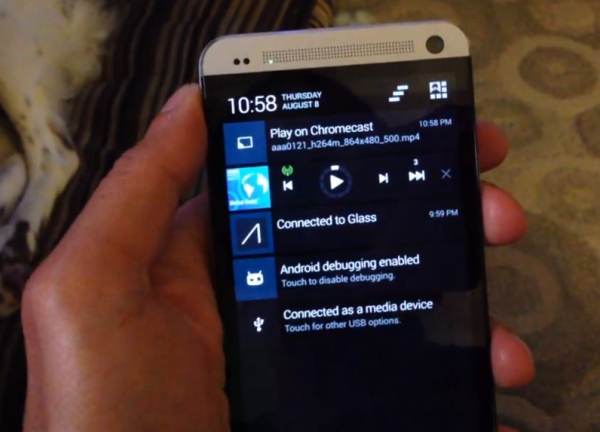 You can’t actually use any of this software yet — Google has only released a beta of its Google Cast software developer kit, and it looks like developers are prohibited from distributing their software at least until the SDK exits beta. But developers appear to be working on a growing number of apps, services, and even custom ROMs that could really open up interesting new possibilities if and when they’re released.

Out of the box, Google’s Chromecast is a device you can hook up to your TV and connect to your home network. Then you can use a smartphone, tablet, or PC with the Google Chrome web browser to stream content from services such as YouTube, Netflix, and Google Play Music or Google Play Movies to your TV.

It also lets you mirror your computer’s desktop or a single browser tab to your TV, but that’s a resource-intensive task since it basically creates a video in real-time and sends it to the Chromecast over your home network.

But developers are working with Google’s tools to teach Chromecast some interesting new tricks.

Koushik Dutta is the developer of ClockworkMod Recovery and a number of other popular Android tools. He’s also a contributor to CyanogenMod, one of the most popular custom versions of Android available for phones and tablets.

He’s been working on a series of apps that let you do things like stream video from your Dropbox account to a Chromecast.

If this gets built into future versions of CyanogenMod (or other custom ROMs), it means you won’t need to wait for app developers to add support for Chromecast. Just use your favorite media apps and you’ll be able to use them to send video to your TV.

Don’t want to spend $35 on a device that only does one thing? No problem, Sebastian Mauer is working on an app that will let you use an existing Android device as if it were a Chromecast.

Cheapcast is an app that runs on your phone or tablet and acts like a Chromecast receiver. That means you can fire up YouTube, Netflix, or another app on your phone or PC and send it straight to your tablet.

Update: An early version of Cheapcast is now available for download from the Google Play Store.

Want to watch that content on your TV? If your Android phone, tablet, or TV box has HDMI output, just hook it up to your TV and you’ve pretty much got a Chromecast — albeit one that probably takes a bit longer to boot since it’s running the full Android operating system instead of the simpler software that runs on Googles Chromecast.

Right now Mauer says he’s just showing an early prototype as a proof of concept. But if you already have an Android TV stick, you may soon be able to use it to do everything you can do with a Chromecast, plus take advantage of its support for running native apps including games, web browsers, or even the XBMC media center app.

6 replies on “Chromecast coming soon: Stream anything from CyanogenMod, turn any Android device into a Chromecast”