Chrome OS tablets may be the new hotness, but the vast majority of devices that have shipped with Google’s Chrome operating system over the years have been laptops… also known as Chromebooks.

But a few years ago we also saw the introduction of a few other categories including Chromeboxes (mini desktop computers), Chromebits (PC-on-a-stick devices), and Chromebases (all-in-one, iMac-like desktops). And… we haven’t seen many of those devices since then.

The Chromebit category has pretty much died out. Chromeboxes are still around, but not all that common. And I was a little surprised to learn today that at least one company hasn’t given up on Chromebases — Acer just unveiled two new ones. 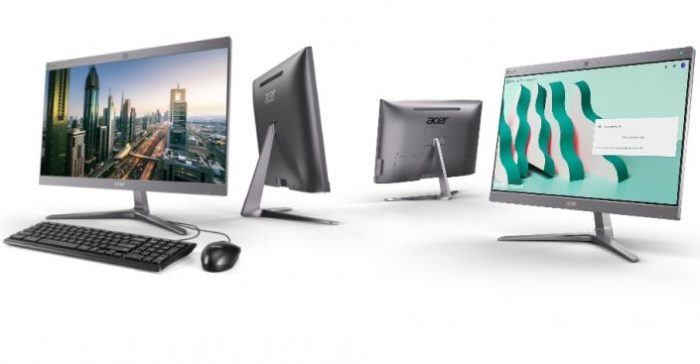 One is a general purpose computer called the Acer Chromebase 24I2. Acer says it could be used either as a desktop computer or an in-store digital kiosk with optional support for a touchscreen.

It supports an unspecified 8th-gen Intel Core processor and support for up to 8GB of DDR4 memory and up to 128GB of solid state storage.

The other is designed for conference calls and meetings. It’s called the Acer Chromebase for Meetings 24V2 and it features integration with Google Hangouts Meet and support for up to 100 callers.

This model features an adjustable touchscreen displayw ith 250 nits of brightness, an Intel core i7-8550U processor, 4GB of RAM, and a 32GB SSD plus a 5MP wide-angel camera for group meetings.