The first Chrome OS laptops are starting to ship today, bringing Google’s vision of an operating system built solely around a web browser to the masses… or to any masses that care to order a Samsung Series 5 or Acer Cromia Chromebook. But Google isn’t the only company offering an operating system aimed at low power notebooks with an emphasis on the web browser, web apps, and synchronization of your data across multiple devices. A company called Jolicloud has been pushing a similar vision for close to three years. 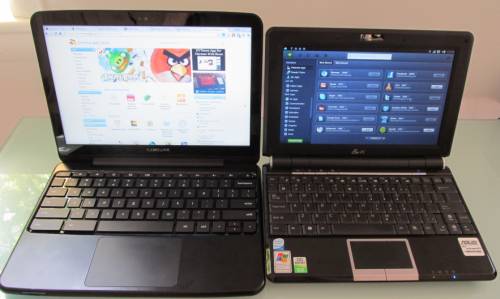 I installed Joli OS 1.2 on my aging Asus Eee PC 1000H netbook a few months ago. And Samsung was kind enough to send me a Series 5 Chromebook to review. So before I put the Series 5 back in the box and ship it off to Samsung I took a few minutes to shoot a video comparing the two machines.

The Samsung laptop has a clear advantage on the hardware side. It has a faster processor, higher resolution display, and it was designed to run Chrome OS. In fact, Google has no plans to offer the operating system as a downloadable, installable file. If you want to install the OS on your existing laptop, the best option available is Chromium OS, the open source version of Chrome which doesn’t have all the bells and whistles (such as super-speedy boot speeds).

Joli OS, on the other hand, was originally designed to run on virtually any netbook with an Intel Atom or VIA C7 processor. Over the past few years the Jolicloud team has expanded the operating system to support all sorts of hardware including desktop computers as well. Because the OS isn’t as tightly integrated with the hardware as Chrome OS though, Joli OS can’t promise the same sort of super-fast boot speeds that you get with Chrome. But it has its own advantages.

Check out the video to see what I mean.:

Like Chrome OS, Joli OS is designed to run web apps in full screen mode. You can’t shrink a browser window or view two web apps side by side at the same time. But here’s the key difference between the two operating systems: Joli OS doesn’t only run web apps.

The operating system is based on Ubuntu Linux and it’s capable of running all sorts of native desktop apps including VLC Media Player, OpenOffice.org, or GIMP for editing images. You don’t have to upload all of your data to the web to create, edit, or manage documents, pictures, or other media.

Both operating systems include file browsers, and you can listen to MP3s, view JPGs, or read PDF files while you’re offline with a Chrome OS laptop. But you can’t do much more than that. Joli OS lets you do just about anything you can imagine doing with a notebook running a more traditional Linux-based operating system such as Ubuntu or Fedora. It just insists that you run your apps in full screen mode.

Like Chrome OS, Joli OS saves your preferences to an online account. You can view your desktop from any computer with a web browser just by logging in. Of course you can’t run native apps like Audacity from a web browser. But you can launch any of your web apps. And if you get a new computer you can login with your Joli OS credentials and not only will your shortcuts automatically appear, but you can click a button to synchronize your new machine and all of your preferred local applications will be downloaded and installed.

There’s a Joli OS app store which offers a combination of web and native apps. And since the operating system allows you to use the Chromium web browser, most web apps that work in Chrome OS should also work with Joli OS. There’s also a social element that lets you see what apps your friends have been installing. I’ve personally never really seen the point, but if that’s the sort of thing that floats your boat, go ahead and invite your friends. 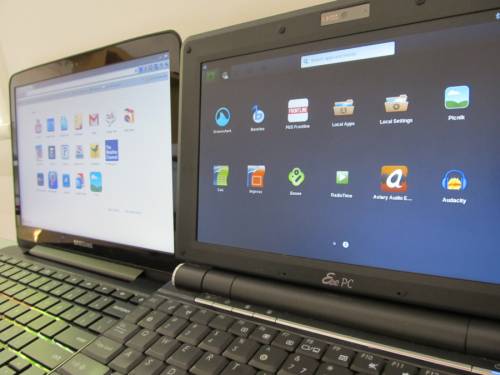 Chrome OS is faster and has the backing of a huge software company. Google has also partnered with some top tier PC makers including Acer and Samsung to ensure the operating system plays well with the hardware it’s delivered on, and to make it accessible in a number of retail outlets around the globe. Jolicloud doesn’t have that kind of clout. But if you like the idea of an operating system built around the cloud which also supports offline and desktop applications, Joli OS might be worth checking out as an alternative to Chrome OS.

18 replies on “Chrome OS vs. Joli OS: Two operating systems with their heads in the clouds”