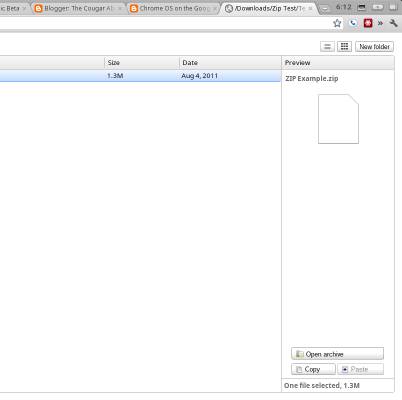 Google Chrome OS is often described as an operating system designed to run a single app: a web browser. But as the Chrome OS project has evolved, it’s started to take on features that help you do some of the things you’d expect to do with a desktop operating system.

There’s a built-in file browser that lets you view downloaded media, photos and screenshots you take with a Chromebook, and a media player that can handle music and video from your SD card or local storage even when there’s no internet connection handy.

But there are still a number of quirks. For instance, while you can cache some data for offline viewing, there’s currently no good way to download your entire Google Docs list of documents for offline editing. And the file browser doesn’t support ZIP files… or at least it didn’t until a fwe days ago.

Google released a Dev Channel software update for the Samsung Series 5 and Google Cr-48 notebooks on Tuesday. Officially the update fixes a problem with Pandora internet radio, updates Pepper Flash, and fixes a bug that had prevented popup windows from restoring properly.

It turns out you can also enable a new experimental feature that allows you to open ZIP archive files on a Chromebook.

You’ll need to be using the Dev Channel in order to get this working, and you’ll have to open a terminal and enter a command to enable experimental_storage. Clearly ZIP support is still a work in progress and it’s not meant for the general public yet. But if you’re not scared of using pre-release software on your Chromebook you can check it out now.