Google Chrome for Android and iOS is a fast, simple, and powerful web browser for phones and tablets. Now there may be another reason to use it: Google is giving users the option of enabling data compression that could reduce data usage by up to 50 percent.

The feature has been available in Chrome beta for almost a year, and now it’s available in the stable version of Chrome for mobile. 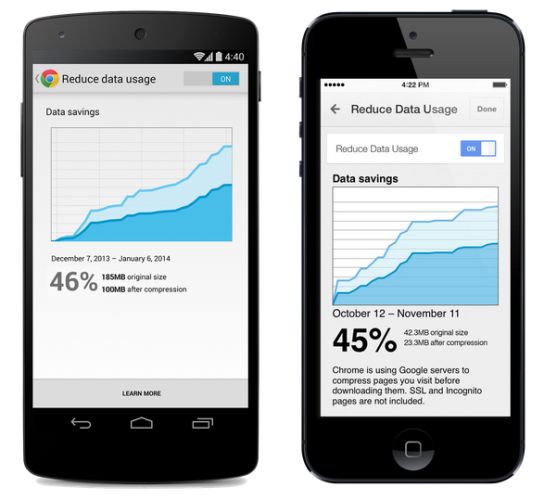 By routing your internet traffic through Google’s servers, the company can compress images and other data before sending them to your device. That cuts down on bandwidth to your phone. While it could speed up page load times, the biggest benefit may be that users with data caps will be able to visit about twice as many websites per month before hitting those caps.

Don’t want all of your traffic to go through Google’s servers? No problem. The feature isn’t enabled by default. You’ll have to turn it on by sliding the toggle for “reduce data usage” in Chrome’s bandwidth management settings.

The latest version of Chrome for iOS also adds built-in support for Google Translate, and Chrome for Android now lets you create home screen shortcuts to websites with just a few taps thanks to a new “add to homescreen” button from the drop-down menu.

4 replies on “Chrome for Android, iOS can now cut your bandwidth usage by 50 percent”