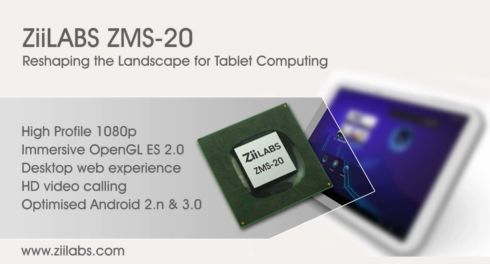 The folks responsible for cranking out computer chips are having a busy quarter. Creative Technology has announced that it will bring two new ZiiLABS processors for tablets, Samsung says it will have a new 2 GHz dual core smartphone chip ready to go by next year, and there’s a report suggesting that AMD has already shipped 3 million Fusion chips, accounting for about half of the company’s laptop shipments.

Creative is aiming both of its new ZiiLABS chips at the tablet space. The ZiiLABS ZMS-20 is a 1.5 GHz ARM Cortex-A9 dual core chip with a custom media processing core which supports 1080p HD video playback, OpenGL ES 2.0 3D graphics, and HDMI 1.4 output.

The ZiiLABS ZMS-40 is a 1.5 GHz quad-core ARM Cortex-A9 chip which Creative says will bring desktop PC performance to tablets.

The ZMS-40 design hasn’t been finalized yet, but you can find more details about the ZMS-20 in the press release.

A Samsung official has told a reporter that the company will launch a dual core 2 GHz smartphone chip “by next year.” The chips won’t necessarily be confined to Samsung phones and tablets, with Samsung considering selling the CPUs to other device makers.

I’m taking this report with a grain of salt for now, since the reporter makes a few silly statements, for example suggesting that since desktop computers often have 3 to 4 GHz processors, a dual core 2 GHz phone would offer desktop class performance. That’s not necessarily untrue, but performance depends on much more than clock speed.

KitGuru reports that AMD has shipped over 3 million of its new Fusion chips, including the AMD C-50 and AMD E-350 laptop chips and the new AMD Llano desktop processors which should soon be available for consumers.

The Fusion platform combines a CPU and graphics processor onto a single chip that AMD calls an APU, or accelerated processing unit.” At this point, Fusion APU chips are accounting for about half of the laptop processors shipped by AMD, which doesn’t surprise me at all.

While AMD has offered powerful desktop processors and graphics cards for ages, the company has never been known for making energy efficient chips, and most laptop computers have used Intel solutions instead. But this year we’ve seen a number of companies including Acer, Asus, HP, and Lenovo ship notebooks with AMD C-50 and E-350 low power processors.

via Engadget and Fudzilla