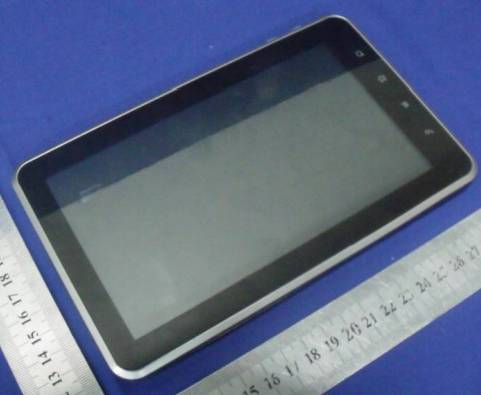 It seems like every day another tablet running Google Android hits the market in China. Every now and again these Chinese tablets from manufacturers you’ve never heard from also make it to the US where they typically sell for very low prices. And on even more rare occasions, the tablets actually feature halfway decent specifications.

A new tablet labeled as M722HC from Shenzhen Yifang Digital Technology showed up at the FCC this week. It runs Google Android 2.3 Gingerbread and has a 7 inch, 800 x 480 pixel capacitive touchscreen display.

If you can get over the relatively low screen resolution the rest of the specs look pretty decent, including a 1 GHz ARM Cortex-A8 processor, 512MB of RAM, and support for 1080p HD video playback in a variety of formats including H.264, DiVX, Xvid, and MPEG1 or MPEG 2. The tablet also features an HDMI port for sending HD video to an external display.

It also supports a range of audio formats including MP3, AAC, WAV, OGG, and FLAC.

According to the user manual the M722HC should get about 6 hours of battery life when watching videos or surfing the web over WiFi. It supports 802.11b/g/n WiFi and has a USB port, microSD card port, and headset jack. The tablet has a g-sensor for automatic screen rotation and comes with between 2GB and 16GB of storage space.

There’s no word on how much the tablet will cost or where it will be available. In fact, it may never actually appear on store shelves in the US. But before any device with a wireless radio can be sold in the US it has to go through the FCC, so the fact that the M722HC has already passed that step is a good indication that someone’s at least hoping to sell it in the States.