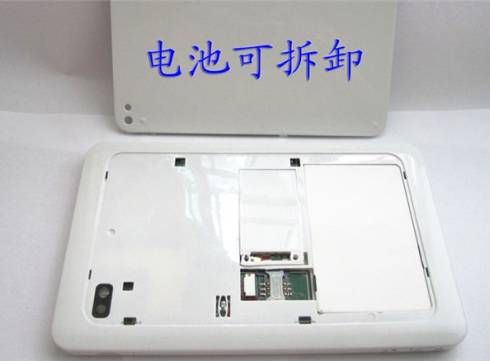 A Chinese manufacturer has released a new 7 inch Android tablet with two things you don’t often see from tablets in the West: a removable battery and the Android 2.3 Gingerbread operating system. The Hong Kong Sheng 708 tablet has a rather catchy name too.

The device has a back panel that you can slide off the tablet to access the battery compartment. While this is a pretty standard feature for laptop computers, most consumer tablets to hit the market in the past few years have had non-removable batteries which means if you run out of juice you need to plug in, and if your battery ups and dies you’re going to have to send the device in for repair or buy a whole new tablet.

The Toshiba Thrive and Cisco Cius tablets are the only big-name Android tablets I can think of that have removable batteries.

This Chinese tablet also runs Google Android 2.3 at a time when most device makers are putting out tablets with either Android 3.x Honeycomb or the older Android 2.2 operating system.

You probably won’t find this tablet in the US anytime soon, but if you happen to be in China you can pick one up for around $300. It features a 7 inch, 1024 x 600 pixel capacitive touchscreen display, front and rear cameras, a 1.2 GHz ARM Cortex-A8 processor, WiFi, Bluetooth, and a G-Sensor.