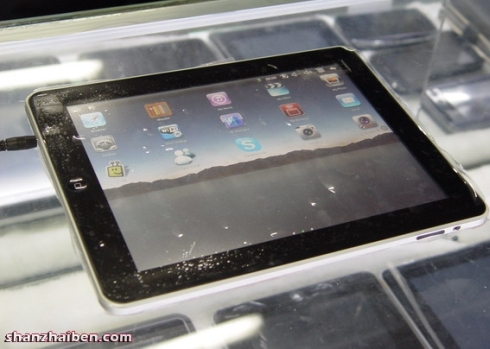 We’ve seen a lot of Google Android powered tablets over the past few months that bear a more-than-passing resemblance to the Apple iPad. The folks at ShanzhaiBen have snagged some details about one of the only models I’ve seen that gets the screen size ans aspect ratio right.

Like the iPad, this machine has a 9.7 inch screen with a resolution of 1024 x 768 pixels. as far as I’m aware, it’s not an IPS display, which means it won’t have the same wide viewing angle support as the iPad. And while the case looks kind of iPad-like, this tablet is made of plastic while the iPad is aluminum.

Under the hood, it’s a different story. While the iPad has a powerful A4 processor, the knockoff has a 400MHz VIA *505 ARM-based procesor, just 2GB of storage, and only 128MB to 256MB of RAM. it runs Google Android 1.5. Shanzhaiben reports that the tablet can barely handle video playback, but that web browsing was fairly pleasant.

The key selling point for this tablet, aside from its screen resolution is probably its low price tag. It’s expected to sell for about 100 Euros, or roughly $140 US.