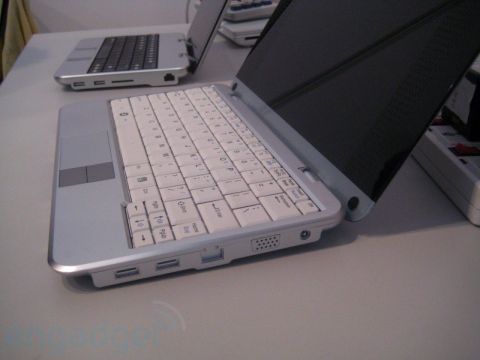 Nobody knows how to make a cheap knockoff of an electronic gadget like Chinese manufacturers. So with already low priced netbooks getting the limelight over the last few months, it should come as no surprise tat we’re seeing even cheaper Chinese versions of popular devices. Engadget managed to snap some photos of several netbook knockoffs from Shenzhen HiVision.

Flipping through the pictures, it looks like the cheapest model is either a fake Razorbook/Alpha 400 laptop with a 400MHz CPU and 64MB of RAM for running Linux or Windows CE, or perhaps this is the real deal. After all, it’s hard to rip off a PC that’s already selling for as little as $150.

Other models look a bit more like your typical MSI Wind/Asus Eee PC models, with one computer bearing a striking resemblance to the HP Mini-Note. There are some oddities here. Some of the photos show PCs with two separate Windows keys. And one of the Mini-Note clones has two mouse buttons on the right side of the trackpad instead of one on each side.

No word on whether you’ll see these netbooks outside of China anytime soon.