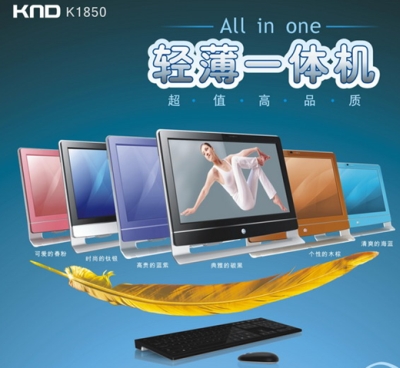 The K1850 is an all-in-one desktop from a Chinese PC maker with an Intel Atom processor at its heart. Nothing too new there. But here’s what’s unusual about the K1850: It has an Intel Atom D510 chip which is part of Intel’s upcoming pine Trail platform.

Shanzai.com reports that the PC has an 18.5 inch display, a 250GB hard drive, 2GB of RAM, a DVD-ROM, and built in WiFi. The low power Atom D510 processor is a dual core Atom CPU. It’s not expected to be significantly faster than the dual core Atom 330 chips available in desktop computers. But it should offer some energy saving enhancements by integrating the graphics and memory controller functions into the same chip as the processor.

it’s not clear how much the K1850 will cost or when it will be available, especially since Intel hasn’t officially released the Atom D510 processor yet. But this is the first product announcement I’ve seen regarding a computer that will use the Pine Trail architecture.