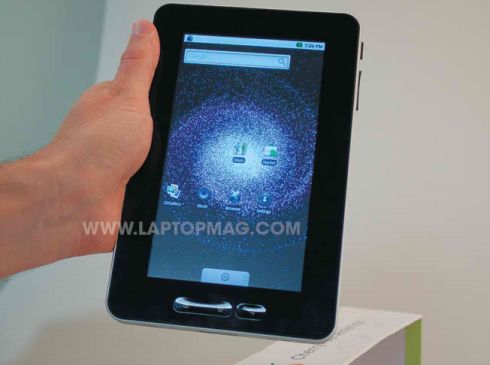 CherryPal’s CherryPad is a 7 inch Android tablet that won’t get mistaken for an Apple iPad or even a Samsung Galaxy Pad anytime soon thanks to its relatively slow processor and limited feature set. But for $188, it doesn’t look all that bad. CherryPal introduced the tablet a few weeks ago, and the folks at Laptop Magazine have just written a short article about the hands-on experience of actually using the CherryPad.

Long story short, the tablet is thin, light, and even reasonably attractive. It has a resistive display which works reasonably well, although it doesn’t support multitouch. The machine is a bit sluggish at times, but it runs Google Android 2.1, and at least for now it can access the Android Market to download and install third party apps.

I suspect the fully functional Android Market is only possible because the CherryPal is flying under Google’s radar. The device isn’t all that different from the Augen GenTouch78 which had its Market access revoked a few months ago. But I suppose it’s always possible that Google is quietly easing its restrictions on Market access or that CherryPad somehow worked something out with Google.

There may be a catch though. Some early customers have reported they placed orders which have yet to be delivered. CherryPal says shipments began on October 15th and all domestic orders in the US should ship within 24 hours, but you might want to wait until a few more users report they’ve actually received the tablet before placing an order. This isn’t the first time CherryPal has been accused of running a scam.