At the beginning of the year, Microsoft announced that new tablets with a display smaller than eight inches would be outfitted with a version of Windows 10 that would be more akin to Windows Phone than the full desktop operating system.

Today, WinBeta has published a series of screenshots showing just what the truncated version looks like on a smaller sized tablet. 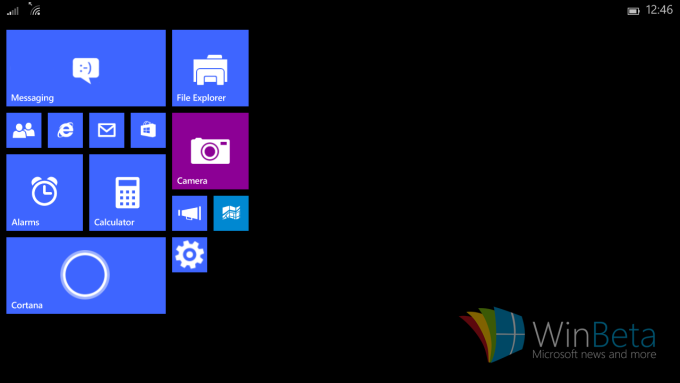 The site has posted a series of screenshots and hands-on impressions from an early build of Windows 10 for small tablets. WinBeta notes that because this is such an early build, there are a number of UI elements that are unfinished, including the Start Screen, which will be polished ahead of the official release later this year.

Windows 10 for small tablets will run the new universal Windows apps, which are also compatible on Windows Phone, as well as PCs. It will not run desktop PC apps (the kind of software you’ve been running on notebooks, desktops, and even some tablets for decades).

Want a tablet that supports both desktop and universal apps? Get one with an 8 inch or larger screen.

The new universal Windows 10 apps scale to a variety of screen sizes, which transfers over to the tablet experience, as well. WinBeta notes that these new apps feature a more tab ( … ) that allows for easy navigation while keeping the screen clear of clutter.

While the small tablet version of Windows 10 only supports universal Windows apps, that doesn’t mean you can’t use it for productivity: Tablets will come with a free version of Microsoft Office and you’ll be able to connect a keyboard and mouse via Bluetooth.

You can visit WinBeta to see more screenshots of Windows 10 for small tablets.