Microsoft’s Windows 10 Mobile software for smartphones will run on a wide range of devices, including phones with entry-level hardware and premium devices that have specs that are competitive with those for other high-end phones.

But not all phones that run Windows 10 will be able to support some of the operating system’s key new features. 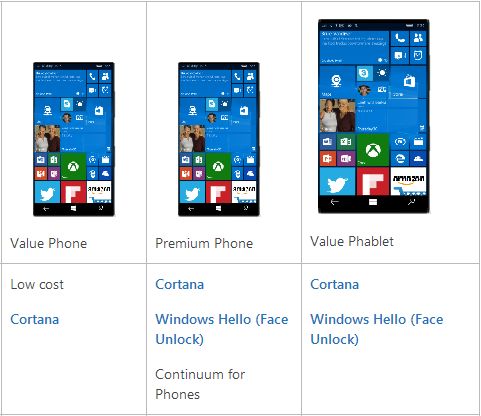 Microsoft says all phones will include the Cortana digital assistant, allowing you take notes, make searches, set reminders, and perform other actions with your voice. But only premium phones will support Continuum for phones, the new feature that lets you connect a Windows 10 phone to a keyboard, mouse, and display to run Universal Windows Apps in a desktop-style environment.

Mid-range and premium phones will both support Windows Hello, another new feature that lets you unlock your phone by looking at the camera, thanks to facial recognition technology.

So how do you know which phones fall into which categories? Microsoft has a chart.

Basically there are three types of phones:

It’s worth noting that all three device types should get at least 1 day of active battery life, according to Microsoft, and each device category includes a microSD card slot for removable storage.

Universal Windows Apps will work on all these phones… but you’ll need a premium model if you want to run those apps in desktop mode.

It’s interesting that Microsoft doesn’t have a category for “Premium Phablet,” even though that’s the category the rumored/leaked Lumia 950 XL would likely fall into, since it has the specs of a Premium Phone, but a 5.7 inch display.