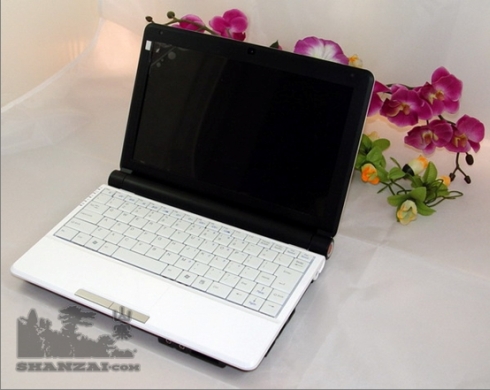 Chinese PC maker CASZH has put together a prototype of a netbook with NVIDIA ION graphics. The unnamed machine packs a 1.6GHz Intel Atom 230 CPU and NVIDIA GeForce 9400M graphics, and the folks at Shanzai.com say it was able to play World of Warcraft reasonably well with frame rates between 20 and 30 fps.

The netbook has a 10.1 inch, 1024 x 600 pixel display, 1GB of RAM, and a 160GB hard drive. While the NVIDIA graphics processor can handle HD video including Blu-Ray decoding, that low resolution screen isn’t going to display all of those pixels. Fortunately, the netbook also has an HDMI output for connecting the laptop to a monitor or HDTV.

It also has 2 USB ports, mic and headphone jacks, a flash card reader, an Ethernet port, WiFI, and a 3 cell battery. Shanzai.com is estimating that the whole package could eventually sell for around $300, but it’s not likely to show up in the US anytime soon, especially not at that price.

The netbook also bears a striking resemblance to the Point of View Mobii ION 230 netbook, which is expected to sell for closer to $500.