The world’s fastest typists have been able to hit speeds up to 216 words per minute using QWERTY or Dvorak keyboards. That’s a lot faster than the rate at which most folks type (the average is 41 wpm), but not as fast as the speed with which stenogrophers can enter text using machines which support “chorded” text input so you can enter syllables or words by pressing multiple keys at once.

Some stenographers can go at 300 words per minute, and the English language record is 360 wpm.

Stenographs are commonly used by court reporters who create real-time transcripts of courtroom proceedings. But they’re not particularly common for home use.

But a new product called CharaChorder aims to bring chorded text input to the masses — the company behind the product demonstrated their new text input device at the Consumer Electronics Show last week, and they say it let users type at 200-300wpm. 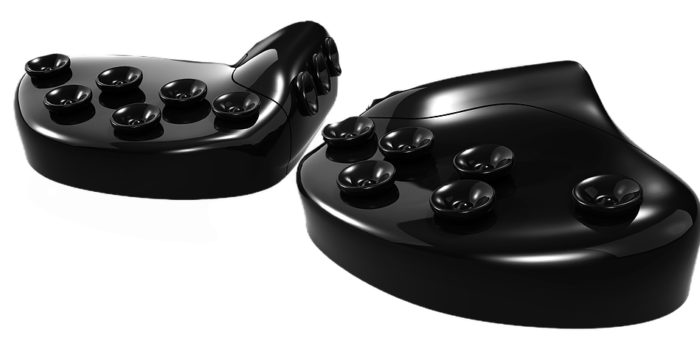 Here’s the idea — the CharaChorder is a text input device that doesn’t look anything like a QWERTY keyboard. And it doesn’t work exactly like one either.

First, you have a choice of entering letters one at a time, the same way you would on a keyboard. But you can also enter all the letters in a word at the same time, and CharaChorder’s built-in processor will analyze the input, figure out the word you’re trying to type, and it should show up on the screen.

Instead of a single board with alphanumeric keys laid out across it, the CharaChorder consists of devices that rest under your left and right hand. Each has a series of sticks that support 3D input — which means you don’t just click on keys, you can also move them in any direction. CharaChorder says that gives you more than 270 unique inputs.

All told, it’s easy to see how this sort of system could speed up text input. But there’s also clearly going to be a learning curve. If it was easy, then home stenography would probably have taken off by now.

According to TechPowerUp, CharaChorder says it takes about a month of practicing for 30-60 minutes of practice per day to get good at using the company’s text input device.

But once you do, speedier input isn’t the only benefit. You can also use optional desktop software to access hotwords, or create custom chords and macros. It also supports “ambidextrous throwover,” which allows you to use either the left or right portion as your only input device — freeing up your other hand for use with a mouse, drawing tablet, or for taking a sip of coffee.

The biggest down side may be that CharaChorder isn’t a thing you can get your hands on just yet — it’s currently up for pre-order for $200, but it’s not expected to ship until December. And if you want to wait until it’s more widely available, you may have to spend more. CharaChorder says the $200 pre-order price will eventually go up to $400 for the full retail price.