The home screen on Android tablets works sort of like a desktop on a computer. You can arrange shortcuts for launching apps or place widgets to show the time, weather, headlines, or other information.

But the folks behind Chameleon think there’s another way to use the Android home screen and they’ve developed an app for Android tablets that offers a customizable experience that can change based on the time of day or your location when you use the tablet.

Chameleon prototype images have been making the rounds for a few months, but now the developers have taken to Kickstarter in an effort to raise money to finish the project and launch Chameleon in the Android Market by September.

Update: The Kickstarter campaign has been cancelled due to a problem collecting donations, and a new campaign is expected to start soon. 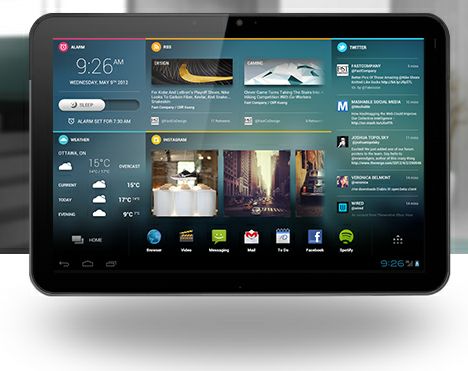 Donors that pledge $5 or more will get a chance to download the app before it officially launches to the public, probably in August.If you’re feeling really generous you can donate larger amounts and get a t-shirt or other rewards including a Samsung Galaxy Tab 2 (10.1) tablet to run Chameleon on.

Chameleon home screens can be customized showing the functions you’re most likely to use at a given time or location. For instance it can bring up email, tasks, and documents when you’re at work, and movies, music, and other entertainment information when you’re at home in the evening.

This solution isn’t necessarily for everyone. Chameleon doesn’t support phones, for instance… at least not yet. And it’s optimized for tablets with 1280 x 800 pixel displays used in landscape mode.

But it represents an interesting alternative to Google’s standard Android home screen… and a more dramatic departure from that home screen than most other options available today.