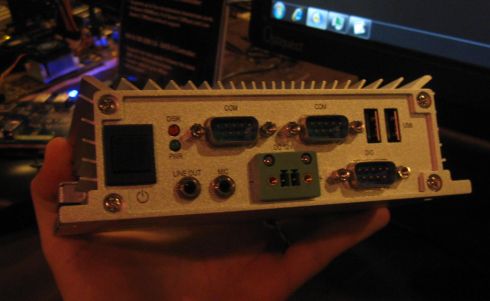 VIA has a small spread at an event near the Las Vegas Convention Center this year, and I wandered over this afternoon to see what I could see. Turns out, not much. VIA was showing the Lenovo IdeaPad S12 and Samsung NC20, which are the only two notebooks I know of that are available in the US with VIA Nano processors. But the NC20 is pretty much on its way out as Samsung pushes the Samsung N510 with an Intel Atom processor and NVIDIA ION graphics.

VIA did have an 11.6 inch Chinese notebook called the NetMedia on-hand, and the new OLPC XO-1.5 laptop which features a VIA C7-M processor. But that’s about it for the laptops.

But VIA isn’t just focusing on notebooks. The company is also showing a mini-desktop called the VIA AMOS-3001, which has a 1.2GHz Nano CPU, Chrome graphics, a VX855 media system processor, and Windows 7. The tiny PC is small enough to fit in my hand, but it has room for HDMI, VGA, Ethernet, mic and headphone jacks as well as 4 USB ports and 3 serial ports.

The company is also showcasing its VN1000 digital media chipset which supports DirectX 10.1 graphics and 1080p HD video playback support. This chipset is most likely destined for low cost desktops rather than netbooks. Finally, VIA is introducing its new USB 3.0-SATA controller.

More photos from VIA’s event after the break.

2 replies on “Catching up with VIA at CES”