Tired of keeping your data and apps synchronized across your phone and your PC? Livi Design is raising funds to build a device that lets you use your phone as a PC. It’s called Casetop, and the idea is that you’d dock your phone into a laptop shell to give it a full-sized keyboard and display.

Your phone also becomes the touchpad for the laptop.

Livi Design is taking to Kickstarter to raise money for the project, and hopes to deliver Casetop devices to customers in December. While a Casetop is priced at $250, early backers can reserve one for $220. But if the project doesn’t reach its ambitious goal of raising $300,000 then the whole thing will be canceled and no money will be charged. 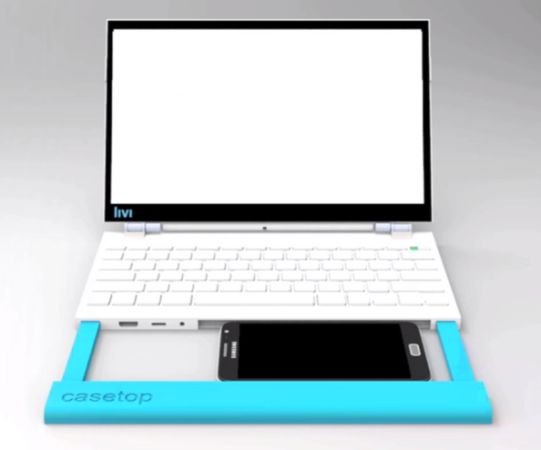 The Casetop is designed to work with any smartphone that supports video output and Bluetooth. That includes iPhone, BlackBerry 10, and many recent Android phones.

Right now the plan is to offer a laptop dock with an 11.1 inch, 720p display, a 56 Whr battery, stereo speakers, a USB port which you can use to charge other devices, and a 78-key keyboard.

If the team surpasses its goal, there may be plans to add 1080p displays, improve battery life, or even add touchscreens.

While the idea of a dock that turns your phone into something more isn’t entirely original (Motorola has pretty much given up on its Lapdocks, while Asus continues to offer Padfone tablet docks in select markets), Casetop is one of the first devices designed to offer cross-platform support for BlackBerry, iOS, and Android phones. It’s also one of the few to use your phone as a touchpad.

Is that enough to help this project succeed where others have failed? It’s tough to say — but since Livi Design is taking the crowd-funded approach, it should be a little easier for the developers to determine whether people actually want their product than it might have been for Motorola. Either the project will get enough money from backers to enter production, or it won’t.