The software that runs on millions of Android phones is based on code from the Android Open Source Project… and since it’s an open source project, it’s possible for anyone to build and modify the software for their own needs, with or without Google’s help. That’s why Amazon can use a heavily modified version of Android for its Fire tablets and TV boxes, and it’s why you can now (sort of) run Android on an iPhone.

Apple’s iPhone software is not open source, so it’s not particularly easy to replace iOS with an alternate operating system. But Nick Lee from Tendigi did the next best thing: he created an iPhone case with the guts of an Android phone and a cable that lets it connect to an iPhone so that you can use the phone’s existing touchscreen display to interact with the operating system. 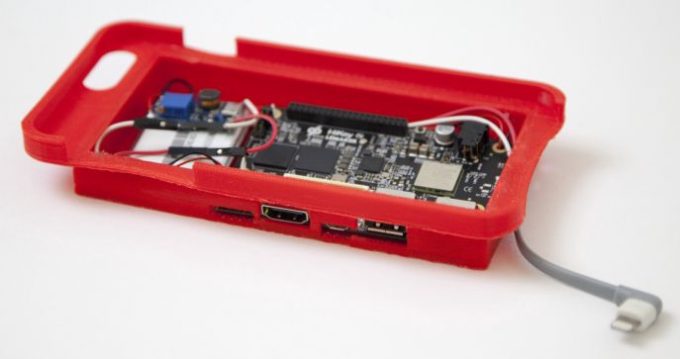 The 3D-printed case holds a LeMaker HiKey system-on-a-module, a battery, and a little other hardware. Android actually runs on the HiKey, not the iPhone. But fire up an app on the iPhone and it will serve as a display and touch input for the Android-based operating system.

As you can see in the demo video, there’s a little lag. When Lee touches the screen or drags his finger across the display, it can take a moment for the action to register. But for the most part, his custom case does let you switch between Android and iOS on a single screen. And the case is just a little thicker than an extended battery case.

Overall, this particular project is more cool than practical. The HiKey Board costs $99, the other components add to the price, and the 3D-printed case is only cheap if you already have a 3D printer, which Lee did not (so he bought one for $550).

But it’s an interesting demonstration that iOS and Android can coexist peacefully… at least with a lot of extra hardware, time, and patience.