Lenovo’s been selling a line of thin, light, and premium laptops with carbon-fiber covers under the ThinkPad X1 Carbon name for a few years. But it looks like the company plans to bring the material to non-ThinkPad laptops.

The upcoming Lenovo Yoga Slim 7i Carbon is a compact, durable laptop with a white carbon fiber body. Lenovo hasn’t officially announced the laptop yet, but a leaked video posted to Twitter by WalkingCat gives us an idea of what it will look like when it arrives.

Update: The Lenovo Yoga Slim 7i Carbon is official, and it’s heading to select markets in the Asia Pacific and Oceana regions in October, but there are currently no plans for North American availability. 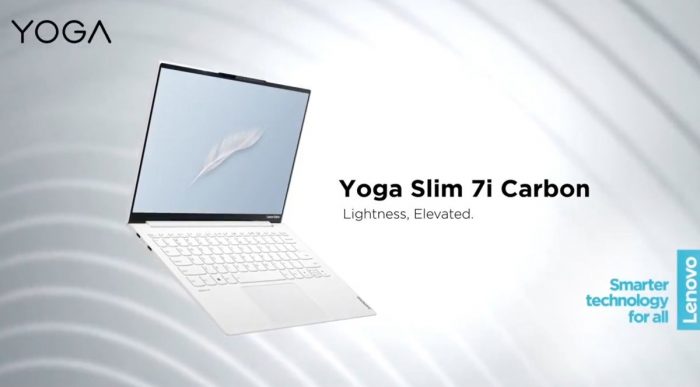 There’s no word on the specs, but the name does give us a few clues. Lenovo typically uses the “Yoga” name to describe convertible notebooks with 360-degree hinges that allow you to fold the screen back for use in tablet, tent, or stand modes (although a few Yoga-branded devices have had clamshell designs).

And Lenovo introduced a couple of other “Yoga Slim 7i” laptops earlier this year:

Both laptops are expected to be available in Europe in November, but Lenovo has not announced any plans to bring either model to North America. Walking Cat notes that, like those models, the new Yoga Slim 7i Carbon is expected to have an 11th-gen Intel “Tiger Lake” processor.

So how will it be different? Well, there’s the carbon fiber lid… and that’s about all we know at this point.

A few other details you can pick up from the video:

Update: A few more details, courtesy of a Lenovo product page that went live a little early and was later removed:

9 replies on “Carbon’s not just for ThinkPads: Lenovo Yoga Slim 7i Carbon leaked”