Android developer Koushik Dutta (Koush) is beta testing a new app tentatively called Carbon, which lets you backup your installed apps. But that’s not all it does. It will also synchronize your apps across multiple devices. 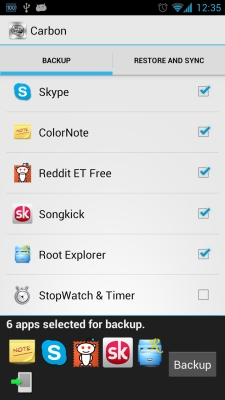 That’s because Carbon can backup your apps and data (including saved games, account information, and more) and upload it to online storage services such as Google Drive or Dropbox.

Then you can run Carbon on a second device and download the apps and data so that your saved games, Twitter account details, or other information can be shared between your phone, tablet, and other Android devices.

Carbon requires an Android 4.0 or later device that’s been rooted to work properly. You can find a download link for the latest beta in Koush’s announcement.

If Koush is a familiar name, that’s because he’s the developer who brought us the popular ClockworkMod custom recovery tool which you can use to completely backup, restore, update, or make other changes to an Android device.

3 replies on “Carbon backs up your Android apps, syncs between devices”