Ubuntu is already one of the most popular Linux-based operating systems for notebook and desktop computers. Canonical is also working on a smartphone operating system called Ubuntu Phone OS. And now Ubuntu is coming to tablets.

Canonical added an Ubuntu on tablets section to its homepage today, plans to showcase the new touch-friendly version of the operating system at MWC later this month, and will offer download links for a pre-release version of Ubuntu for tablets on Thursday, February 21st. 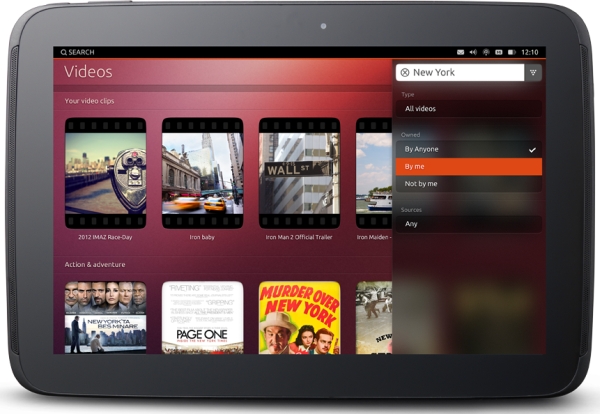 Ubuntu for tablets offers a user interface optimized for touch input, as well as support for tablet-style apps. But under the hood it’s the same operating system as Ubuntu for desktop and notebook computers.

In other words, if you plug in a keyboard, monitor, and mouse, you can use a tablet running Ubuntu as if it were a desktop PC.

That lets you run any full-fledged desktop apps that have been compiled to run on ARM-based chips, including desktop office apps, web browsers, image or video editing apps, video games, or development tools.

You can also run desktop apps in tablet mode — but much like Windows 8 (or Windows RT), Ubuntu on tablets offers a split-panel view that lets you run a tablet app in one window and a desktop app right next to it. For instance you can make a Skype video call while surfing the web or editing a document.

There’s a mobile SDK for app developers that want to write native apps, but Canonical is also putting an emphasis on web apps written in HTML5. You can add shortcuts to web services such as Google Maps or Facebook as if you had installed a native app (something you can also do in the desktop version of Ubuntu).

Canonical isn’t releasing its own tablet anytime soon. But the developer preview which is coming Thursday will be available for installation on Google Nexus 7 and Nexus 10 tablets.

Eventually we may see device makers build tablets specifically for Ubuntu. The software maker is already lining up hardware partners to ship phones with Ubuntu Phone OS later this year or in early 2014.

While the Google Nexus 7 with a quad-core ARM Cortex-A9 chip will be one of the devices capable of running the developer preview, it sounds like Canonical is setting the bar pretty high for hardware designed to run the OS: An entry level Ubuntu tablet should have a dual core ARM Cortex-A15 CPU, 2GB of RAM, and a 7 inch or larger screen.

A high-end model should have a quad-core ARM Cortex-A15 or Intel x86 processor, 4GB of RAM, and a 10 inch or larger display.