Hot on the heels of the Pebble smartwatch’s success, another company launched a Kickstarter campaign for a watch that does more. Martian Watches have mostly normal clockfaces instead of e-ink displays; the big story here is that you can issue voice commands through these wrist huggers and conduct voice calls.

Given the success of smartwatches on Kickstarter (if not in the marketplace just yet), I’m hoping that developers jump on this bandwagon hard and make some awesome apps. Not just because I like the idea of a Dick Tracy-esque device on my arm, but because it could be the thing that makes the tablet phone possible.

Remember earlier this month when Kevin C Tofel of GigaOM asserted that tablets would eventually replace smartphones since mobile data usage keeps going up and up along with screen sizes? The main barrier to using your tablet as a phone is the size, of course. So Tofel is exploring alternate methods of taking calls.

This little Bluetooth handset is the size of a pen and works the way you think it does — by connecting to a phone and allowing you to take or make calls.  It’s the same general idea as that ASUS handset that came with earlier versions of the Eee Pad Memo. 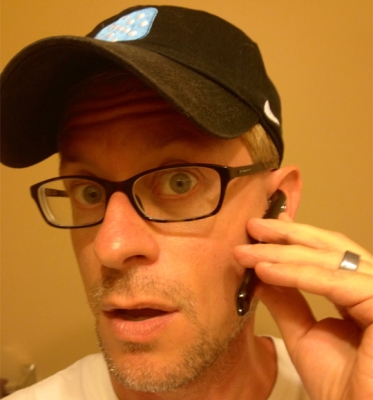 While a wireless handset is one way to handle things, it feels over-complicated. For one, it’s still something you have to hold when you talk. It’s also another thing to keep track of. And are people really so bothered by wired or wireless headsets?

I agree with Tofel’s assertion in general, but I don’t think Bluetooth handset pocket pen things are the stepping stone between smartphone and tablet phone use.  Why not go for something simple we already know people like: Smartwatches.

The current crop of wrist devices aren’t that inspiring, I know. The Sony smartwatch was a disappointment but a step in the right direction. And the MotoActv wasn’t smartwatch-y enough, focusing on fitness stuff. Still, it allowed people to answer calls using a wired or Bluetooth headset.

Most of the smartwatches that appear to have the most promise aren’t available yet, though they have received some buzz thanks to Kickstarter. Aside from the Martian Watches we have the MetaWatch Strata to look forward to.  Like the Pebble, the Strata is open to developers who could create apps that allow owners to both answer and make calls with the watch.

Smartwatches have the benefit of being small enough to not feel like an extra burden, and of being fashionable, so people will want to wear them. If you don’t like it on your wrist, get a chain and attach it to your belt loop, wear it as a necklace, or hang it elsewhere.

Paired with a good smartwatch, a tablet could easily replace my phone in most situations. Do you agree?