Amazon recently started offering Prime Exclusive Phones which are basically regular smartphones that are sold for $50 off their list price… and which come with ads that are displayed on the lock screen and in the notification tray. They also come bundled with a bunch of Amazon apps including the Amazon shopping, Kindle, Video, and Music apps.

But unsurprisingly it looks like it’s pretty easy to remove all the Amazon features from at least one of the first two Prime Eclusive phones.

RootJunky has posted instructions for removing all signs of Amazon software from the Prime Exclusive version of the Moto G4, which Amazon offers for $150 and up. 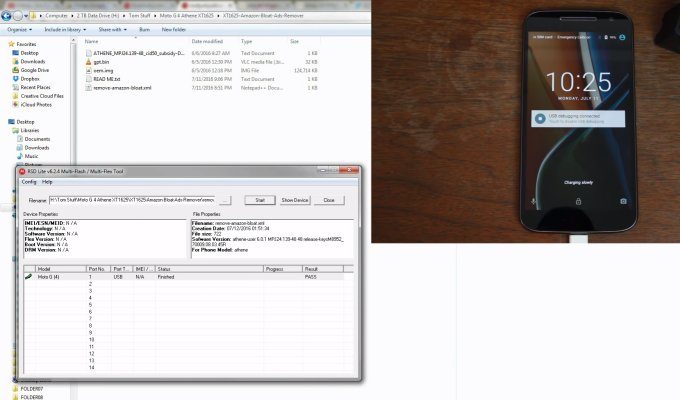 Update 2: There are some reports suggesting the method for removing ads on the BLU R1 HD doesn’t work anymore.

The instructions are pretty easy to follow if you’ve ever rooted a phone, unlocked a bootloader, or flashed custom firmware before.

Basically what you’re doing is replacing the version of the software that ships with Amazon’s variant of the phone with something a bit more like the software you would get if you bought the phone from another source.

But if that all sounds like too much work, it’s not like the ad-free version of the Moto G4 is particularly expensive. Motorola sells it for $200 and up… no hacking required for an ad-free experience (until you open an ad-supported app or website on the phone).

14 replies on “You can remove the ads from Amazon’s Prime Exclusive Moto G4 (or pay $50 more to just get the ad-free version) Update: Blu R1 HD too”