Google released the developer preview of Android L on June 27th, and on the same day folks figured out how to root it.

Rooting an Android device gives you superuser access to the operating system which allows you to play with files, folders, and disk partitions that would otherwise be hidden. 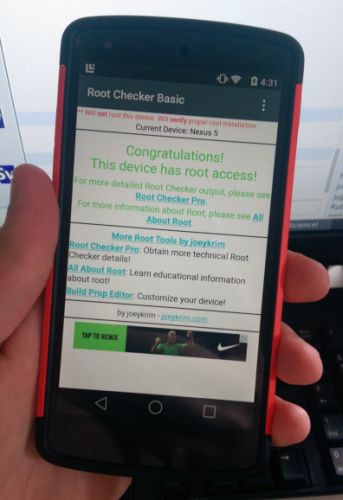 In order to root Android L on a Nexus 5 or Nexus 7 you’ll need a custom recovery such as CWM or TWRP and the latest version of Chainfire’s SuperSU.

You can find step-by-step instructions and The Android Soul.

Don’t want to jump through all the hoops involved in loading the Android L factory image on your phone first? You can download a flashable ROM based on the Android L developer preview for the Nexus 5.

Since not all of those apps have been updated yet, many apps that require root privileges don’t yet work with Android L. But as more of these apps are updated we’ll see root become more useful for folks running Android L.

Bear in mind… this is a developer preview release. You probably won’t want to run Android L as the primary operating system on your phone or tablet until it becomes more stable and until more apps are updated to run on the operating system. Until everything’s more stable, make sure to backup your device or use MultiROM so you can return to a more stable version of Android when you’re done testing.

But it’s good to know that by the time Android L is ready for launch, you’ll probably be able to root it and run root apps almost as easily as on earlier versions of Android.