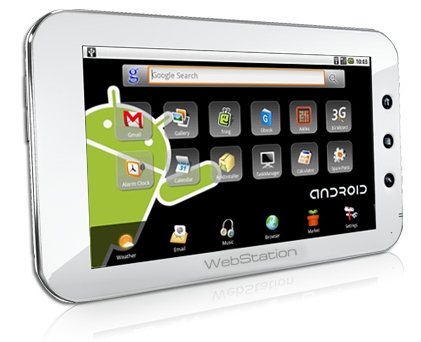 The Camangi WebStation is one of the first handheld tablets to hit the streets running Google Android. In other words, you can run Android apps and use the Android web browser to surf the web on this 7 inch touchscreen tablet over WiFi. No 3G data plan required.

But like the Archos 5 Internet Tablet and other Android tablets, the Camangi WebStation has a major hurdle to overcome — Google only allows access to the Android Market for smartphones. If you’ve got a tablet or netbook running Android and it doesn’t have all the normal Android hardware trappings such as dedicated home, menu, and search buttons and a 3G modem, you’ll need to rely on third party app stores which aren’t as complete or easy to use as the Android Market which already has tens of thousands of apps. It would be sort of like trying to use an iPod touch without access to the iPhone App Store.

Anyway, Camangi is working on that issue. Android Guys reports that today the company sent out an email alerting customers to the fact that there’s a firmware update for the Camangi WebStation and access to two of the most useful Android apps: Fring and Aldiko. Interestingly, the company also put out a press release (PDF link) that leads more like a somewhat skeptical blog post (“Camangi claimed that they’ve solved several technical issues and improved the performance of the WebStation”).

Aldiko is an excellent eBook reader for Android that lets you read books in the EPUB format. But it’s killer feature is integration with several online directories of free and public domain books which you can download directly to your device from the Aldiko eBook app.

Fring is a communication client that lets you chat with contacts AOL, Windows Live, Yahoo, and Google messengers. But its killer feature is support for Skype, allowing you to make and receive Skype calls on Android devices — now including the Camangi Webstation.

Unfortunately software updates will only take you so far. Early reviews of the Camangi WebStation were pretty consistent on one point: It’s slow. And that’s something that’s probably going to require a processor upgrade, not just new firmware — although the firmware upgrade probably doesn’t hurt.

If you’re still interested, you can pick up a Camangi WebStation from Amazon