The C64 Mini is a small replica of the classic Commodore 64 computer that comes with a joystick, an HDMI cable for connecting to modern TVs, and it comes with 64 games pre-installed.

First unveiled a little over a year ago, the C64 Mini is now available for purchase in the United States (better late than never).

You can pick one up for $80 from Walmart, GameStop, or Amazon. 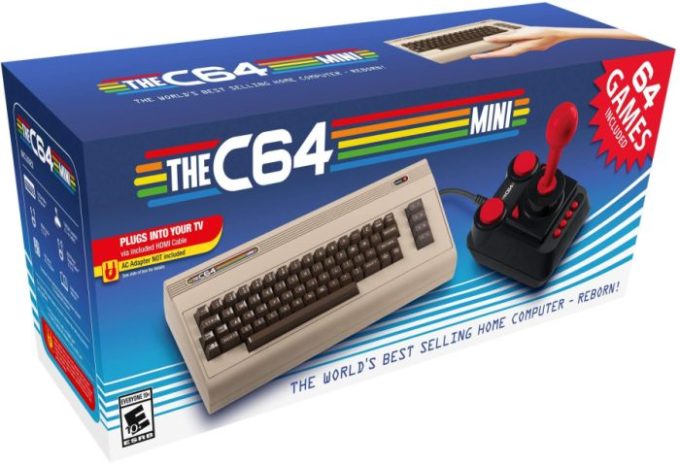 The C64 Mini is largely yet-another-attempt to cash in on the success of retro gaming consoles like the NES Mini. There are plenty of other ways to play C64 games. But there’s something kind of charming about this little device that’s a 50 percent scale replica of the original.

It’s also easier to set up than an emulator. All you need is a power adapter and a TV. Plug it in, power it up, and you’ve got access to dozens of licensed games out of the box.

Unlike some other retro consoles, the C64 Mini also allows you to load your own games and files via a USB flash drive. And since it runs BASIC, you’re not only limited to playing games.

One thing to keep in mind is that the keyboard on the device itself is non-functional. So if you want to use a keyboard with the C64 Mini you’ll need to connect one to one of the two USB ports.

You also might want to check out some reviews the ones I’ve seen from sites including Engadget, GamesRadar, IGN,  and TechRadar have been mixed.

Updae: Or if you’d rather play C64 games in your web browser, the Internet Archive can help. The web site just added a new collection of Commodore 64 games and programs which are playable online, thanks to a hosted version of the VICE C64 emulator.