Smartphones used to have physical keyboards, scroll wheels, and lots of buttons. Then along came phones with capacitive touchscreen displays and small bezels. These days most phones still have power and volume buttons, but that’s about it. And soon they could be gone too.

Chinese phone makers Vivo and Meizu are both expected to unveil new phones this week, and rumor has it that the Vivo model could be one of the first phones with no physical buttons at all.

Meanwhile Meizu may be eliminating something else commonly found on phones: a visible front-facing camera.

It’s unclear from the latest leaks where Vivo plans to put the camera on its new button-less phone, or how users are expected to control the power and volume… but plenty of phones have supported a tap/knock to wake feature for a while that lets you turn on the phone using just the touchscreen.

As for volume controls, perhaps you’ll need to rely on software dials for that too… or maybe Vivo has added some sort of gesture support or touch-sensitive sides to the phone. We should know more when the company officially unveils the new Vivo Apex 2019 on January 24th.

Meizu’s new phone, meanwhile, will probably have power and volume buttons — but it could have a virtually invisible front-facing camera.

Some phone makers have already started hiding a fingerprint sensor in the display itself. Meizu may try to do something similar with a camera, hiding it beneath a transparent glass section of the screen so that you can make video calls or snap selfies when the camera’s in use, but ignore the camera when you’re not using it.

The rumor comes at a time when phone makers seem to be chasing the dream of an all-screen phone by adopting slim bezels, notches or even small holes in the display for the front-facing camera, or sometimes even pop-out cameras that hide behind the screen until you need them.

Update: Meanwhile Let’s Go Digital has uncovered a Samsung patent application that suggests the company is considering releasing a phone with a small secondary transparent display that covers the selfie camera hole, allowing you to see things like camera status information.

Just because Samsung has filed a patent application for the technology doesn’t mean it’ll ever see the light of day… but it does present another possible strategy for delivering a phone that doesn’t appear to have anything but a display on the front. 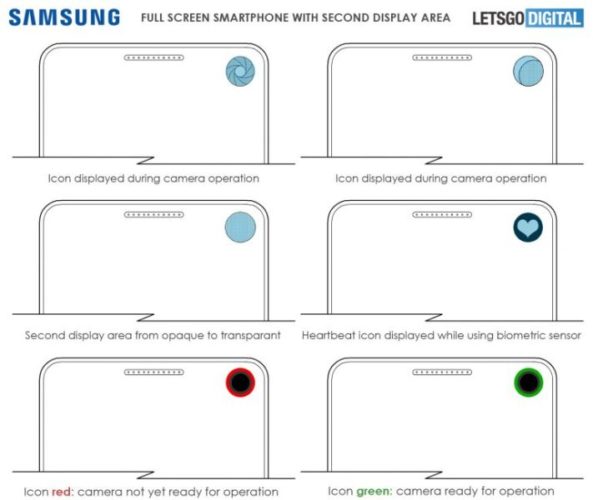 5 replies on “Button-free, hole-free phones on the way?”