For more than a year, hardware hacker Bunnie Huang has been working with Sean Cross to design an open laptop. That means you’d be able to boot the computer and run most applications without requiring any proprietary, closed-source binaries or other software, and the hardware designs would be open and available.

Now Huang and Cross have managed to create a few fully functional prototypes of the Novena laptop and they’ve shared the details in an article on Make. 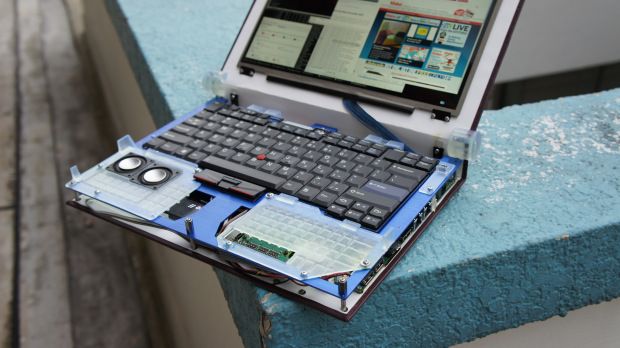 The Novena prototypes aren’t exactly powerful… or pretty — unless you’re drawn to a sort of cyberpunk aesthetic. They’re also not cheap — while some folks are drawn to open source software such as LibreOffice because it costs nothing, while Microsoft Office can cost hundreds of dollars, the Novena project is aimed at people who are drawn to open platforms that allow users to modify, share, and generally much about with hardware and software designs in any way they see fit.

The idea is that you can pay for a device — but unless you can modify it, you don’t really “own” it.

Bunnie Huang’s photos show a prototype with a 13 inch, 2560 x 1700 pixel display, a Freescale i.MX6 processor, a SATA solid state drive, two Ethernet ports, USB, and other connectors as well as an FPGA integrated into the mainboard to support hardware hacking. That’s not something everyone’s going to need — but Huang did set out to build his own laptop, not necessarily one that would appeal to everybody.

At this point the prototypes use a case made of aluminum, leather, laminate paper, and 3D printed parts.

But since the project has generated a lot of interest among hardware hackers, there are plans to launch a crowd-funding campaign to build a case that anyone can use to house a laptop built from the Novena designs.

Those designs allow for some flexibility. For instance, you could choose your own display. Want to save battery life? Insert your own Pixel Qi low power screen. Don’t need a high-resolution screen? Pick up a cheap LCD.

The laptop also uses off-the-shelf battery packs designed for RC cars and similar devices. This lets you choose the battery pack size that best fits you needs or swap out batteries on the go.

While that means that some of the components might not be truly “open,” it does mean you can replace parts such as the battery or display with off-the-shelf components.

Folks looking for a gaming machine or a multimedia powerhouse might be disappointed. Although Freescale’s low-power chip has a Vivante GC2000 GPU that can handle 3D graphics and HD video, Huang says he doesn’t use the GPU at all and uses software decoders in order avoid proprietary blobs. But if you’re planning to spend the money to build your own laptop from scratch and you’re going with an ARM Cortex-A9 processor, you’re clearly more concerned with openness than bleeding edge performance. Freescale offers better documentation for its i.MX6 chips than you’ll find for most other low-power processors.

You can find more details about the Novena laptop at the project wiki.