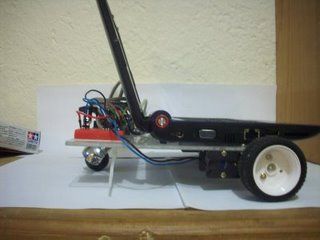 Sure, netbooks are cheap, light, and tiny which makes them pretty cool as far as computers go. But you know what most netbooks don’t have? Wheels. Fortunately, one hacker has set out to remedy this oversight, building a rover-style robot powered by an Acer Aspire One and an Arduino Diecimila microcontroller.

The contraption is capable of moving about the floor, accepting commands sent over a network connection. What’s more, it uses the netbook’s built in webcam to stream video back to another computer on the network. This is still a work in progress. The machine doesn’t go in reverse, and steering is apparently difficult. But the guy behind the project hopes to soup things up a bit in the future, possibly even adding the abillity to steer with a Wii Nunchuk.

You can check out a video of the rover in action after the jump. The good stuff starts about 1:25 in.

One reply on “Building an Acer Aspire One-based robot”