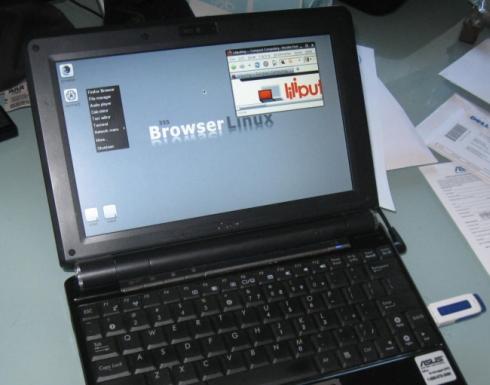 Google may think that the most important application for any operating system is a web browser. But while Google’s approach is to build an entire OS around the browser, others have taken a simpler approach. BrowserLinux, for instance, is basically a stripped down, Linux-based operating system designed to run just a few programs including a file manager, audio player, and Firefox 3.5.5.

BrowserLinux is based on Puppy Linux, which was already a light-weight Linux distribution. The latest version is just a 78MB download, and you can easily install it to a USB flash drive using Unetbootin. It might be a good idea to try booting from a flash drive before installing the operating system to your hard drive. Because while a browser-only OS might sound like a good idea at first, odds are you’ll run into something else you wish your computer could do before too long.

If not, then by all means, install BrowserLinux to your hard drive, because I’m pretty sure it will boot a lot faster that way. Loading the operating system from a flash drive can easily take a couple of minutes, during which time you’ll find yourself wondering why you’re not just booting Windows or a fuller featured Linux-based OS like Ubuntu.

The advantage of BrowserLinux, of course, is that there are very few running services to tie up your system, which means that you can devote most of your computer’s resources to the browser, which could come in handy on a netbook or other low power computer with limited memory.

8 replies on “BrowserLinux: Simple OS for web browsing, not much else”