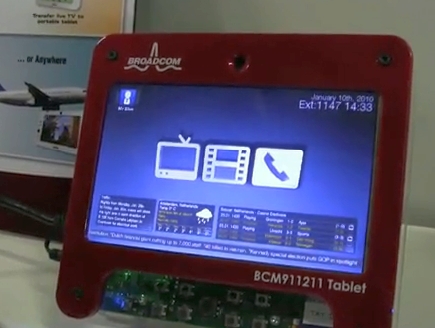 Chip maker Broadcom designs the HD video accelerator found in a handful of netbooks today, as well as a wired and wireless communication technology found in a huge number of phones, computers, digital media boxes, and other devices. With tablet-style devices set to take over the world (or at least with dozens of PC makers looking to release tablets in the next year or so), Broadcom laid out its vision for a tablet ecosystem at Mobile World Congress last week. Sascha from Netbook News has a video overview.

Here’s the nutshell version: Tablets should be able to handle voice, video, internet content, and integrate into home functions. The idea is that it will be a hub for everything you do in the home, combining the functions you would expect from a phone, TV remote control, and laptop computer.

The concept devices Broadcom showed were small touchscreen devices running Google Android and a custom user interface. The reference design has Bluetooth, WiFi, GPS, LAN, and Broadcom video processors. One usage scenario would let you, for example, watch TV while browsing for additional content on a handheld tablet, and then you hit the play button to start watching on th ebig screen.

The same tablet could be used to make voice or video calls in high definition as well as web surfing.