A few years ago I spent close to $600 on an Asus UL20A notebook. In 2009 it represented a good mix of features I was looking for: It had a larger screen and keyboard than a netbook, offered similar battery life, and much better performance. 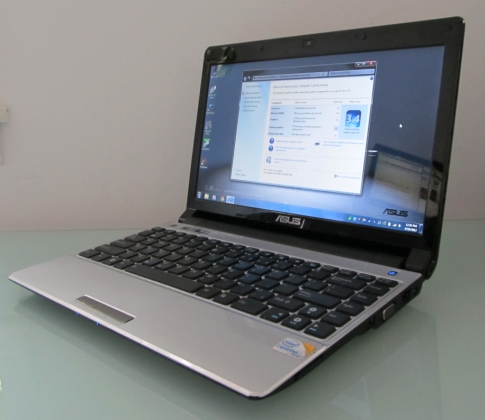 The Asus UL20A has been out of production for a while, and its Intel Core 2 Duo SU7300 processor, 2GB of RAM, and 5400 RPM SATA II hard drive are starting to feel a bit dated.

But I’m not quite ready to pull the trigger and replace a laptop that still works reasonably well with a new ultrabook. While I could probably find a decent model for $600, I’m holding out for a reasonably priced thin and light laptop with a solid state disk, a high resolution display, and long battery life.

So I’ve decided to make a few simple upgrades to my Asus UL20A and see if I can breathe enough new life into it to last me another year or two.

The first upgrade is a no-brainer. The Asus UL20A shipped with 2GB of RAM, but it supports up to 4GB. So I bought a 2GB stick of RAM

For the second upgrade, I decided to replace the 250GB 5400RPM hard drive with a 128GB solid state disk

. I don’t really need more space than that on a computer that I primarily use for working on the go (and around the house).

The total cost of those components? $89.15 after rebate.

The extra RAM should help with multitasking and general performance, although it won’t make the computer any faster per se. The solid state disk has much higher read and write speeds than a typical hard drive, which will help the notebook boot more quickly, launch apps faster, and perform some tasks requiring disk transfers better.

Since this is an older laptop, it uses DDR2 memory and a SATA II disk interface. So any performance gains might not be quite as significant as they would be on the move from a hard drive to a SSD in a system that supports SATA III.

But SATA III disks are backwards compatible, so I picked up a 128GB OCZ Agility 4 SSD recently for $75. There was a $20 rebate at the time, bringing the price to just $55 plus tax.

Technically, the OCZ Agility 4 disk should be able to handle read speeds as high as 420 MB/s and write speeds of up to 300 MB/s. Since I’m using the disk with a SATA II interface, my top speeds fall pretty far short — but the SSD is still much faster than the hard drive I’d been using for the last 3 years.

If I decide to move to a new computer that doesn’t have an SSD, I can bring the Agility 4 with me, and hopefully it will perform even better.

The Asus UL20A has an access panel on the bottom of the laptop which makes replacing the memory and storage a snap. Just remove three screws, pop open the panel, and you can upgrade the RAM easily. 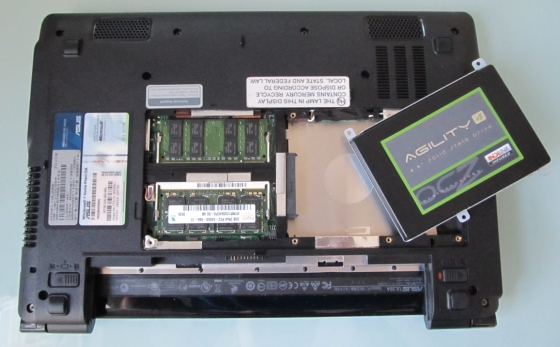 There are a few more screws holding the 2.5 inch hard drive in place, but once you remove them you can slide out the HDD, remove it from its tray, pop in the SSD, and slot it back into the laptop.

If you have the proper hardware and software, you can create a disk image and copy everything from the hard drive to your new SSD. But I decided to take a different approach and just slot the unformatted SSD into my new PC and close it up.

Then I plugged in a USB disc drive and brought out the system restore DVDs that came with my computer. While the SSD is much faster than the hard drive, the DVD drive isn’t particularly speedy and the process took a while.

Using Windows Update to install Windows 7 Service Pack 1 and all the other necessary updates took even longer… but about 24 hours after I started the process, I had my UL20A up to date and running most of the same software that had been installed previously.

So how does the system run after the upgrades?

Well, first, I’ll point out that it’s not a completely fair test to compare a brand new SSD with a 3-year-old hard drive that’s been in use constantly. It’s also not entirely fair to compare a fresh install of Windows with one that’s been running for a few months (I did a full system restore on my computer earlier this year).

That said, CrystalDiskMark reports that read speeds are almost 4 times as fast as they were, and write speeds are nearly 8 times faster than before.

The laptop used to take about 1 minute and 15 seconds to boot to a usable desktop. Now it takes around 30 seconds.

And the Windows Experience Index has been boosted. I expected the RAM and Primary hard disk scores to go up, and they did. But oddly the processor and graphics scores are also a tiny bit higher than they were before I made the changes.

After the upgrade process the Asus UL20A is certainly no speed demon. But it certainly feels more responsive than it did before I spend $90 to upgrade the hardware.

Theoretically the solid state disk could offer other improvements. It has no moving parts, uses less power, and generates less heat than a hard drive. This should allow the laptop to get slightly longer battery life and run more quietly since the fan won’t have to work as hard to keep the system cool.

In practice, the fan still seems to run much of the time and I haven’t noticed any major impact on battery life — but I haven’t been using the upgraded laptop for very long yet.

All told, I’m pretty happy with the upgrades, especially given how much cheaper it was to upgrade my existing laptop than it would be to buy a new model.