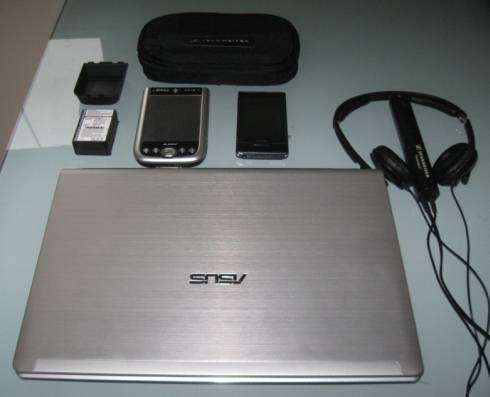 Some of you may have noticed I’ve been a bit quieter than usual over the past two weeks. That’s because I was visiting family in New Zealand.

In case you were wondering, traveling from Philadelphia to New Zealand takes an awfully long time — about 25-30 hours one way. But thanks to a good book or three and some personal tech, the flights were actually relatively pleasant. And thanks to a light weight mini-laptop that I threw in my bag, I was able to keep up on the latest news and lend Lee a hand in keeping Liliputing up to date from the road while still enjoying the first real vacation I’ve had in about two years.

I’m back at home now, but I figured I’d give you a little peek into my travel bag. Here’s what I took with me for pleasure and business purposes.

I decided to pick up this 12.1 inch laptop with a dual core Intel SU7300 processor after testing out a review unit a few weeks ago. The notebook strikes a pretty good balance between price, power and battery life, while offering more screen resolution, processing power, and graphics capabilities than you’ll find in most Intel Atom powered netbooks. While I wish the UL20A got better battery life, I’ve found that with the energy saving features turned on, this laptop can run for up to 6 hours, which is slightly better than my aging Asus Eee PC 1000H. I left that 10 inch netbook at home and took the UL20A with me for working on the road and I was quite pleased with its performance.

I’ve been testing the Zune HD that NVIDIA sent me for the past few weeks to see how the NVIDIA Tegra platform performs on a portable media player. I figured there was no better test than a long flight. I wound up loading up the media player with 20+ hours of video and over 300 songs. In terms of audio and video fidelity, the Zune HD was excellent. It also got great battery life. I didn’t measure the battery performance very rigorously, but I found I could use it for a few hours a day without recharging very often. I was a bit less impressed with the over-reliance on the touchscreen display. 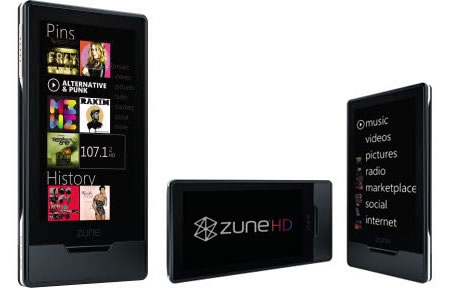 A few hardware buttons for controlling media playback while the device is in your pocket would be nice. I’ll have more thoughts to share in a detailed review soon. Meanwhile, you can enter to win this custom (if slightly used) Zune HD from Microsoft and NVIDIA. 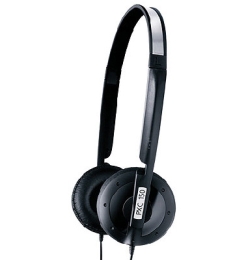 I suffer from tinnitus, which means if you stick me in a silent room I’m likely to start complaining that I hear a ringing sound. It’s not clear what the cause is, but my money is on the fact that I attended an awful lot of loud rock concerts when I was younger. Anyway, I’m not looking to cause any more damage to my ears, so a set of noise-canceling headphones is a must for watching movies or listening to music or podcasts on an airplane, train, or other noisy environment.

The PXC 250 headphones were some of the cheapest over-the-ear headphones I could find, and they do a very good job of filtering out low rumbling tones like the sound of an airplane engine so that you don’t have to crank the volume on your media player. In fact, when I flicked on the noise-control circuitry even without playing any audio, the headphones were about as effective at filtering out noise as the set of earplugs I usually carry with me on a plane. The only down side is that these particular headphones aren’t all that comfortable and I found I couldn’t use them for more than 2-3 hours at a time before my ears started feeling pinched.

This PDA has been my trusty companion for nearly 6 years. While it might seem a bit dated (thanks to the Windows Mobile 2003SE operating system), the Axim X50v has a 624MHz XSCALE CPU, a 640 x 480 pxixel screen, and can run a whole slew of third party software, which is more than I can say for the Zune HD. Sure, it can’t handle HD video, but thanks to the TCPMP multimedia player, it can handle a variety of audio and video formats that the Zune HD cannot. And thanks to the CF and SD card slot, I was able to load it up with 10GB of music, movies, podcasts, video games, and oh yeah, my contacts, calendar events, and tasks.

When my PDA was first released, it shipped with a relatively low capacity 1100mAh battery, although you could opt for a bulkier 2200mAh battery. These days, you can pick up a ridicously chunky 3600mAh battery for next to nothing on eBay. I ordered one just before embarking on my trip, and just like with the Zune HD, I honestly haven’t bothered to perform a rigorous battery test, because the truth is the PDA can run for several days of casual usage without recharging when using this battery. On the other hand, it practically doubles the weight of the PDA and it’s kind of ugly. I don’t advise using a battery like this unless you really need the extra battery life.

New Zealand outlets use the same voltage as those in the US, so there was no need to purchase expensive converters. But you do need a plug adapter in order to use US electronic devices in New Zealand, so I picked up two adapters which let me keep the computer, Zune HD, and Dell Axim charged. One thing I found interesting is that most New Zealand wall outlets featured individual switches that let you cut the power when you’re not using it.

The adapters I ordered cost just $3.29 each

plus a few bucks for shipping.

Update: As has been pointed out in the comments, New Zealand actually does use a different voltage standard than the US, but since my notebook had a power brick that could handle 110 to 240V and the other items I had with me could be charged via USB, these cheap adapters were able to do the trick.

Overall I was pretty happy with my tech choices. These devices didn’t take up much space at all, fitting easily into my backpack and/or pockets. The Zune HD and Dell Axim were a bit redundant, but since the Zune was a review unit I figured I’d take it with me. Unlike the Axim, the Zune HD is capable of playing 720p HD WMV and H.264 video without transcoding. But it has just 16GB of storage, so I wound up compressing a number of videos in order to cram as much onto the device as possible since the device doesn’t have an HD display anyway.

On the other hand, the Zune HD is much smaller and lighter than the Dell Axim, while getting better battery life out of a much smaller battery. If there were more third party applications available for the Zune HD, I might consider picking one up for myself.