So what’s in my gear bag for CES this year? 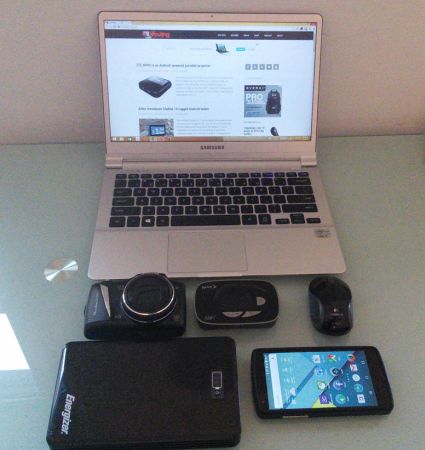 Honestly… almost exactly the same stuff that was in my bag last year. If it ain’t broke, don’t fix it.

I picked up this ultrabook with a 13.3 inch, 1600 x 900 pixel display and an Intel Core i5 Sandy Bridge processor in 2012 and it’s been my mobile workhorse ever since.

While there are faster devices that have been released over the past few years, this model still packs enough power for writing, researching, image editing, and some light video production tasks. It’s also super-light, weighing just 2.4 pounds.

My only real complaint is that the battery’s only good for around 3-4 hours these days.

That’s where this external battery pack comes in. While it adds an extra pound of gear to my bag, it lets me more than double the amount of time I can use the laptop without plugging in to recharge.

This battery also has a USB connector so I can use it to keep my phone charged on the go.

In the past I’ve relied on a Clear USB modem for internet access in locations where I don’t have WiFi access. But Clear has pretty much shut up shop, and the WiMAX network it relied on is shutting down later this year.

So I recently swapped out my FreedomPop WiMAX modem for a new 4G LTE model.

FreedomPop provides 500MB of free data each month, but you can also pay for extra data. As I get ready to board my flight to Las Vegas I haven’t upgraded my account yet — but if the WiFi at my hotel is lousy I’ll probably upgrade to a plan that gives me 4GB or 5GB so I can do a bit of work from the hotel. That should be enough to get by if I upload videos and other large files from the convention center press room.

Incidentally, FreedomPop gives away a little extra free data when you add friends to your contacts… so if you feel like adding me as a friend, you can use this link.

What can I say? I prefer a mouse to a touchpad… and this one’s small, cheap, and wireless.

I recently had to replace the Spigen Neo Hybrid case that I’ve been using with this phone after it cracked, but the phone is still going strong more than a year after I bought it.

This’ll be my primary device for keeping track of my schedule, navigating from place to place, listening to podcasts while I walk from place to place, and possibly for providing emergency internet access via WiFi tethering if and when the FreedomPop hotspot doesn’t work.

It may also serve as a backup camera — particularly if I have time to snap a quick photo to upload to Twitter, Facebook or Google+ but which I don’t plan to post on Liliputing.

I picked up this camera shortly before CES 2011, and I’ve been using it to snap photos and shoot videos for Liliputing ever since.

It has a wide-angle lens, optical image stabilization, and a 12x optical zoom. As a non-professional photographer, I appreciate that it’s simpler to use than a DSLR, but one of these days I might update to a newer model with an even higher zoom level and/or the ability to to shoot 1080p video (this model goes no higher than 720p).

That said, sometimes things do break. So here’s what I’m taking along just in case anything stops working.

I’m currently in the process of reviewing an Asus EeeBook X205 laptop. This $200 Windows notebook has an Intel Atom processor and just 32GB of storage, so it’s not the most powerful machine. It also lacks a full-sized SD card slot and has only 2 USB ports.

But the notebook gets around 10 hours of battery life and it’s fast enough for basic work. If my Samsung ultrabook dies on me, I’ll use the EeeBook X205 to get work done… it’ll just take a little more time to shrink videos before uploading them to YouTube, and I’ll have to transfer photos from my camera either using a microSD card instead of a full-sized card, or by connecting a USB cable.

For the flight, I’ve got a Kindle Touch for reading, and a pair of noise-canceling headphones for listening to music, podcasts, or audiobooks.

The Nexus 7 I took last year has been wonky since I upgraded it to Android 5.0, so I’ve decided to leave it at home and focus on reading/listening rather than watching movies during my 5 hour flight this year.

For the hotel room, I’ve got a portable humidifer from CVS — the Satechi model I bought last year died shortly after I took it to Vegas and the new CVS model seems to pump out more moisture anyway. The air is dry in Las Vegas and I’m tired of waking up with a bloody nose. Hopefully this will be the year I don’t.