I spend the year writing about mobile devices, but to be honest, I spend an awful lot of time standing around in my home office staring at a 22 inch monitor. There’s at least one week a year when I really get to put mobile tech to the test though. Covering the Consumer Electronics Show in Las Vegas requires a mobile gear kit that’s reliable, light weight, and which offers decent wireless connectivity and long battery life.

So what am I putting in my gear bag this year? 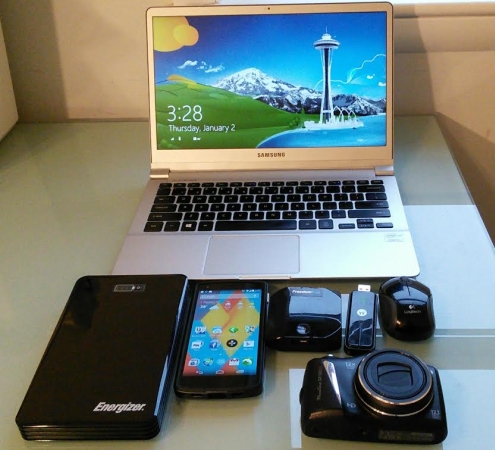 Like last year, I’ll be using a Samsung Series 9 ultrabook to write most of the articles you’ll see in the coming days. It’s a laptop with a 13.3 inch, 1600 x 900 pixel display and an Intel Core i5 Sandy Bridge processor. Most importantly, it weighs just about 2.4 pounds. Sometimes I’m not even sure it’s in my backpack, and have to open my bag and double check.

Unfortunately there’s a big down side to thin-and-light ultrabooks like the Series 9. This notebook doesn’t have a user replaceable battery.

When I bought it in late 2012, the notebook got up to 6 hours of battery life. These days it tops out at closer to 4.5 hours.

I thought about picking up a new model with a Haswell processor and 9+ hours of run time (figuring that after a few years it’d still offer 5+ hours), but instead I stumbled upon a cheaper option.

Since I can’t open up my laptop and throw in a spare battery, I figured I could get an external battery. My colleague Avram Piltch at Laptop Magazine was quite taken with this model, so I decided to pick up an 18000mAh Energizer battery.

There are cheaper options available, but this company offers a “free tips for life” program so that if the charging tips you need don’t come in the case, you can order them for free (plus shipping costs) and get up to two tips per year.

I haven’t extensively tested the battery yet, but it seems capable of fully charging my laptop more than once — which means that instead of having to find a wall socket every 4 hours, I should now be able to go at least 8-10 hours between charges.

As an added bonus, I can charge the battery and my laptop at the same time, and the battery also has a USB port which I can use to recharge my phone or other devices.

The only down side is that the Energizer XP18000A weighs about a pound, which means my 2.4 pound ultrabook now feels a bit more like a 3.4 pound notebook in my bag.

For the past few years I’ve relied on hotel and press room WiFi to get a lot of work done at CES, but I’ve also carried a Clear USB modem which let me sign up for 4G WiMAX coverage one day or one week at a time, as needed.

This year I’m taking the Clear stick along again, but I’ve also packed a FreedomPop mobile hotspot in my bag. FreedomPop offers 500MB of free WiMAX data per month free of charge. Personally I’ve signed up for the $4 per month plan which lets you roll over unused data, so I’ve got about 2.25GB of data to use before I have to pay another penny.

I haven’t entirely decided which device I’ll use — if someone reminds me in a few days, I’ll update this post with more details. Both devices rely on the same WiMAX network, but the FreedomPop works with multiple devices at once, since it’s a WiFi hotspot, while the Clear stick only works with the laptop it’s plugged into.

The world may be moving toward touchscreen input, but my laptop doesn’t have a touchscreen, and while I like the touchpad, I’m much more comfortable with an old-school mouse.

The first time I covered CES, I didn’t even have a smartphone. I took my Dell Axim PDA and a tiny Nokia handset. Man, I miss the battery life on that phone.

This year I’m taking a Google Nexus 5, one of the best smartphones you can get for under $400. Some folks complain about the battery life, but it lasts longer than the HTC One X I had last year. And did I mention that I’m lugging around a gigantic 1 pound backup battery?

I don’t typically do a lot of blogging from my phone, but it’s nice to have a device that I can use to snap photos with in a pinch if my camera is inaccessible. More importantly, I’d be quite literally lost without a smartphone for navigation, scheduling appointments, and you know, occasionally making a phone call.

Faithfully serving up images to Liliputing readers since January, 2011, my Canon PowerShot SX130 will be making the trip to Vegas once again.

This camera has a wide-angle lens, a 12x optical zoom, and a 12.1MP image sensor. Videos top out at 720p, and it won’t record videos longer than 10 minutes, but I kind of like that, since it helps me keep my videos brief.

It’s still basically a point-and-shoot camera that doesn’t give you as much control over your images as a DSLR. But that suits me just fine, since it’s been about 20 years since I took a photography class in high school.

Canon has released a few updates to this camera line since I purchased mine, but nothing’s made me want to upgrade in the past few years.

There’s always a possibility things could go wrong, so I rarely go to CES with just a single laptop. This year’s backup will be my aging Asus UL20A. It’s an 11.6 inch notebook I bought in 2009. It features an Intel Core 2 Duo Su7300 processor, a 1366 x 768 pixel display, and Windows 7 software.

I’ve also loaded it up with Linux Mint 16, which I’ve been having fun playing around with recently. I suspect if I do need to take this laptop out of the suitcase, I might end up using Mint instead of Windows, since it tends to run some apps (such as GIMP) a bit more efficiently.

That’s about it for my work gear, but I’m taking a few extra items (besides clothes and toiletries) this year. My Amazon Kindle Touch and Google Nexus 7 (which I won by opening the wrapper to the only KitKat bar I’ve purchased in years) will keep me entertained on the flights to and from Vegas with eBooks, videos, and games.

I tend to stay at inexpensive hotels with ventilation systems that don’t do much to combat the dry desert air in Nevada, so I’m going to try out a Satechi portable humidifier and see if I can wake up at least one morning without a nosebleed this year.

And my Audio Technica ATHC-ANC23 noise cancelling headphones will hopefully come in handy both on the airplane and while working from my hotel room or press rooms.

Meanwhile, I’ve always wondered just how much walking I do during a week of trade show coverage. This year I’ll find out, since I’ll have a Withing Pulse activity monitor on my belt all week.