CES 2013 is about to start up, which means its time for me to put my mobile reporting kit through the paces. From Sunday through Thursday I’ll be running from press event to press event, wandering the show floor, meeting with consumer electronics companies, and somehow trying to find time to write about all of that and post pictures and videos to Liliputing.

It’s a pretty grueling week, but it’s a great way to practice what I preach: I spend more time using mobile computing gear during CES week than any other time of the year… which is funny, because the only reason I really go to Vegas every year is to see what new mobile tech is angling to make my gear look obsolete in the near future. 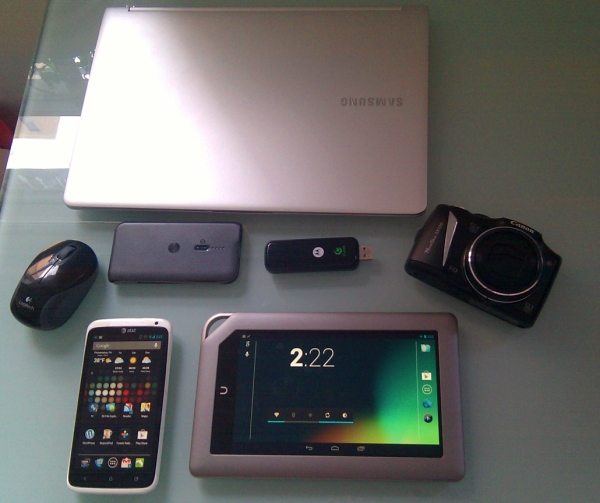 This is the first year I’ll be covering the show with an ultrabook. I picked up a Samsung Series 9 NP900X3D a little over a month ago.

It measures half an inch thick and weighs just about 2.5 pounds, but this laptop also has a 13.3 inch, 1600 x 900 pixel display — something I’ve come to rely on as a blogger, since I like to have side-by-side windows open for writing and researching.

The Intel Core i5 Sandy Bridge processor in this laptop was already a bit dated when I bought it — but it’s far faster than the CPU in the laptop I took to the last three Consumer Electronics Shows, the Asus UL20A.

By picking up a model with a Sandy Bridge processor, I also saved a few bucks. This laptop was on sale for $800 when I bought it, and just the other day Amazon was selling it for only $700.

That laptop won’t do me much good unless I can get online. While there are press rooms at the show with WiFi and Ethernet, it’s always a good idea to have a backup plan — and the same goes for press conferences and other events.

I don’t spend enough time connecting my laptops to mobile broadband throughout the year to sign up for a service contract. But WiMAX provider Clear offers contract-free day and week-passes.

Since I picked up a Clear USB modem a few years ago, I can take it with me to Vegas and get a week of unlimited access for $25. The speeds aren’t amazing and coverage indoors can be spotty in some areas. But it’s not bad for a cheap backup plan.

I actually really like the touchpad on the Samsung Series 9 laptop… as far as touchpads go. It supports multi-touch gestures such as two-finger scrolling and tapping, has just the right amount of sensitivity, and works with Windows 8 actions like edge-swiping.

But I still find a standard mouse to be more efficient for editing photos and generally getting stuff done when a notebook is resting on a table rather than your lap.

This Logitech M185 wireless mouse doesn’t take up much space, didn’t cost much money, and gets the job done.

My smartphone of choice at the moment is the HTC One X. It has a fantastic display and a speedy processor. It’s what I’ll be relying on to keep on top of email, RSS feeds, and other news from the show floor, and it’s basically my GPS unit which will help me get around Las Vegas over the course of the week.

The camera’s also good enough to serve as a backup if anything goes wrong with my Canon camera.

I’m not a big fan of HTC Sense software, so I’ve been running custom ROMs on this phone pretty much since day one. There’s an early build of CyanogenMod 10.1 based on Android 4.2 Jelly Bean, but it’s not stable enough to use as a daily driver yet — and the camera doesn’t work.

Instead I’m currently running a ROM called King Kang which is based on Android 4.1 and combines features of CyanogenMod, AOKP, and Paranoid Android.

There is one problem with the HTC One X: It has less than stellar battery life and the battery isn’t swappable

So I’m also taking along a Motorola power pack which can fully charge the phone at least once.

I’m not a professional photographer, and I don’t try to play one on this blog. But the point-and-shoots I was using up until a few years ago didn’t really cut it, so I picked up a slightly better point-and-shoot before CES 2011.

The Canon PowerShot SX130 has a wide-angle lens, a 12x optical zoom, and image stabilization. It can shoot 720p HD video too.

It’s not as versatile as a good DSLR, but it was a lot cheaper… and it’s a lot simpler to use.

A NOOK and a Kindle

I don’t expect to have a lot of down time for reading in Vegas, but there’s a 6 hour flight between here and there.

Not pictured in the photo above is the Amazon Kindle Touch which is loaded with eBooks and which I probably won’t have to plug in to charge once during my time in Vegas.

In case I don’t feel like reading, I’m also taking along a NOOK Tablet which is running CyanogenMod 10.1 (Android 4.2) which I can use to watch videos. I thought about packing my Google Nexus 7 tablet instead, but I have a model with just 8GB of storage and very little free space for movies.

The NOOK Tablet wins because I can load a few videos on a 16GB microSD card slot and take them with me.

I like to take a backup computer with me in case my primary machine breaks in the line of duty. In past years I’ve packed a netbook in my suitcase, but this year I’ll be taking an Acer Aspire S7 ultrabook which the company loaned me to review.

Technically it’s faster and has a higher resolution display than my Samsung Series 9, so I might be tempted to use it as my primary machine and use the Samsung as a backup. But the battery life isn’t as good on the Acer laptop, and the exhaust vents on that thing are jet engine-loud. I might be embarrassed to use it in the press room.

Hopefully I’ll get a chance to use it enough that I’ll be able to finish up my review of that ultrabook shortly after I get back from Vegas though.