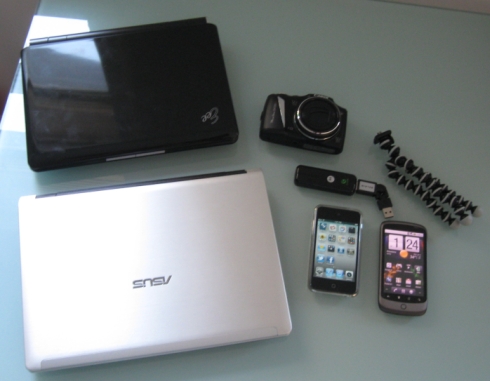 I’m on my way to Las Vegas for the Consumer Electronics Show. While the show doesn’t officially kick off until Thursday, the first pre-show press conferences start on Tuesday and I’ll be there to cover news from Asus, Toshiba, NVIDIA, and others. Since I’ll be spending a week reporting from the road, I thought I’d share the mobile tech I’m taking with me. After all, this is a web site about mobile technology.

This has been my mobile workhorse for a little over a year. The Asus UL20A has a 12.1 inch, 1366 x 768 pixel display, a 1.3 GHz Intel Core 2 Duo SU7300 processor, 2GB of RAM and 250GB of disk space. While Asus and other companies have released faster, lighter, or cheaper computers since I picked up this model in late 2009, it’s still actually a little more powerful than the aging Toshiba 15.6 laptop I use as my primary work machine while I’m at home.

I’ll be using the UL20A to edit images and video and to post articles to the site from the CES show floor, my hotel room, or other locations in Vegas.

I’ve learned never to rely on public WiFi at trade shows, so even though I canceled my month-to-month CLEAR subscription a while ago, I’m taking a USB dongle with me so I can purchase CLEAR day passes as needed. At $10 per day for 5 or 6 days, this will be cheaper than signing up for a one month plan, since there’s no registration fee for a day pass.

Last year I used CLEAR’s 4G WiMAX service throughout the show and had no problem getting online from news conferences, the show floor, or my hotel room. Many of my colleagues who relied on 3G networks had less luck, thanks to network congestion. It should be interesting to see how things go this year since I expect far more journalists to show up with 4G modems.

After using a Canon PowerShot A590 point-and-shoot camera for the past few years, I decided it was time for an upgrade. The SX130 is simpler to operate than a DSLR, but it has a nice wide angle lens, 12x optical zoom, and image stabilization. It also shoots in 720p HD video.

I’ve only had this camera for a few days, but I’m already convinced it was well worth the money I spent on it. I’m looking forward to putting it to the test over the next week. 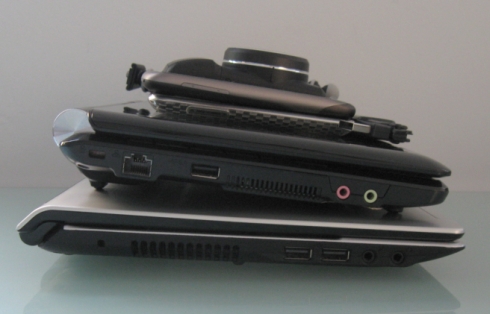 A good camera needs a good tripod. But I don’t want to wander the show floor carrying around a tripod that’s taller than I am, so I picked up a Gorillapod Mobile. It may not look that impressive, but thanks to its uber-flexible design you can rest this tripod flat on a table or wrap the legs around an object (like a chair back, table leg, or bannister) to get a different angle.

The tripod also has interchangeable tips, including a standard camera mount and a suction cup that I can use to shoot images or videos with other devices like my iPod touch or Google Nexus One.

The iPod touch will serve as a sort of backup video camera. It also shoots 720p HD video, and as an added bonus you can edit movies directly on the device using iMovie and upload them straight to YouTube over WiFi. I’ve actually been using the iPod touch to do this for the past few months, and while the video quality isn’t as good as you’d get from the Canon PowerShot SX130, it’s surprisingly not bad. If anything happens to the PowerShot, I’ll just pull the iPod touch out of my bag.

Last year Xavier from GottaBeMobile gave me a hard time about my antiquated Nokia dumbphone and Dell Axim PDA combo. This year I’ll be bringing my Google Nexus One smartphone to the show. While my old system served me well for years (I don’t think I could have run down that Nokia battery if I tried), the Nexus One has changed my workflow significantly, making it easier to find news on the go, respond to email without pulling out a laptop, and most importantly, figure out where the heck I’m going thanks to Google Maps.

The Nexus One can also shoot audio and video in a pinch. And if the CLEAR modem doesn’t cut it, I can turn on the mobile WiFi hotspot feature on the Nexus One to share my T-Mobile 3G connection with my computer.

Honestly, I expect to leave this netbook in my hotel room most of the time, but I like to be prepared for emergencies and showing up to cover a show like CES with just one computer seems like a bad idea. If the Asus UL20A stops working for any reason, I’ll have the Eee PC 1000H as a backup.

I actually haven’t used this netbook much for the last year or so, but I have pulled it out of storage every now and again to test alternate operating systems such as MeeGo and Jolicloud. I was too lazy to re-install Windows XP before packing my bags, so the Eee PC 1000H is actually running Jolicloud at the moment. If I need to use it for production work, it should be interesting to see how Jolicloud serves my needs. Theoretically as long as I have access to a web browser and image editing software I should be good to go, but I’m much more used to Windows than Jolicloud or any other Linux-based OS.

Aside from batteries, clothes, toiletries, snacks, and a book to read on the plane, that’s pretty much it for my CES luggage.

While I’ll be posting updates on Liliputing as frequently as I can, you can also keep up with me during CES week by following me on Twitter for the latest thoughts, photos, videos, or whatever I have time to share from behind the scenes.